This decade has seen them meet in nine ODIs - with India winning six to Pakistan's three. 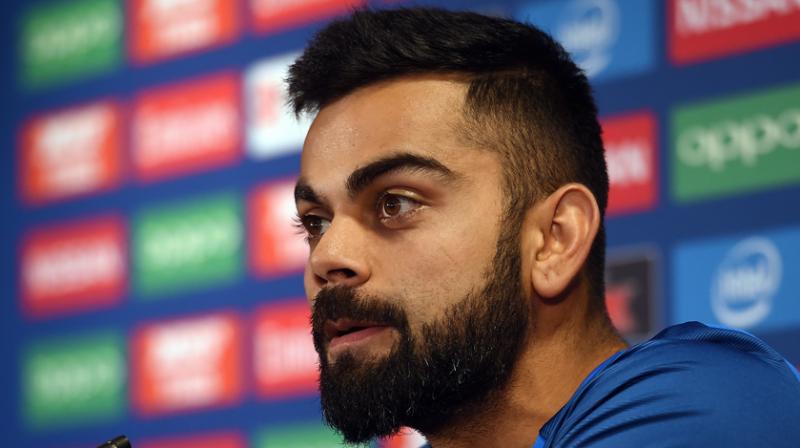 "There are no problems whatsoever. The team is totally focused on the Champions Trophy, " said India captain Virat Kohli at the press conference.(Photo: AFP)

Birmingham: Indian skipper Virat Kohli has insisted it will be a united India that faces Pakistan when cricket's biggest rivals meet in their Champions Trophy opener at Edgbaston on Sunday.

The build-up to India's defence of the 50-over title they won in England four years ago has been dominated by reports of a row between captain Virat Kohli and coach Anil Kumble.

Former India leg-spinner Kumble's contract expires after the end of the Champions Trophy.

The Board of Control for Cricket in India (BCCI) has been criticised for advertising Kumble's job a week before a tournament featuring the world's top eight one-day international(ODI) sides got started.

But Kohli, speaking to reporters at Edgbaston on Saturday, said: "There are no problems whatsoever. The team is totally focused on the Champions Trophy."

The star batsman accused some members of the media of making mischief, adding: "They're doing their job, they're trying to create a nice livelihood."

"We're focused on our livelihood, which is on the field, " he added.

Yet for all that, players on both sides have tried to label Sunday's clash as "just another game", the fact is the fixture commands the attention of millions around the world like no other.

Political rivalry means the two nations have not played a bilateral series since 2012-2013.

This decade has seen them meet in a mere nine ODIs - a meagre return for fans on the cricket crazy sub-continent - with India winning six to Pakistan's three.

"We don't play them often," said Kohli. "They've always been a team that can surprise any team on the day, " he added.

India also have plenty of bowling options, with several talented seamers vying to join spinners Ravindra Jadeja and Ravichandran Ashwin in their attack.

For Mickey Arthur, the Pakistan coach, this will be his first direct involvement in cricket's blockbuster fixture.

However, he insisted Pakistan were "unbelievably calm" after more than a fortnight in Birmingham preparing.

"If you've crammed for an exam, you're always on edge," said Arthur, a former coach of both his native South Africa and Australia. "You always show a lot of tension because you know you haven't done the work".

"But if you prepared properly, you'll be nervous but it will be an excited nervousness because you know you're ready. There's nothing more you could have done, " he said.

Pakistan captain Sarfraz Ahmed certainly showed no sign of pre-match nerves as he recalled how his side had only just qualified for the Champions Trophy.

"We are number eight (in the world rankings), where else can we go?" said Sarfraz with a huge grin.

"For sure they (India) will be under pressure," added the gifted wicket-keeper/batsman.

Arthur has tried to change Pakistan's 'old-fashioned' approach to ODIs and has been heartened by the progress of their batsmen especially.

"In the last year we've scored the third-most amount of 300s," he said. "I think that's testimony to the brand of cricket that we are starting to play, " he said.

Meanwhile, Arthur said an attack set to include the likes of left-arm paceman Mohammad Amir had the variety to trouble India.

"We always say you pick an attack to take wickets," he explained.

"We've got everything at our disposal tomorrow to allow Saf (Sarfraz) to pull the strings to make sure we can try to bowl India out, because that's got to be priority number one, " he added.

India have never lost to Pakistan in a 50-over World Cup or Twenty20 match.

Pakistan, however, have won two of their three Champions Trophy showdowns.

Victory on Sunday would be a boost in a group where South Africa, the world's top-ranked ODI side, beat Sri Lanka by 96 runs at the Oval on Saturday.

But just winning alone would mean so much by itself to either India or Pakistan.