Sports   Cricket  04 May 2019  Kohli and AB de Villiers share heartfelt message ahead of their last game of IPL 2019
Sports, Cricket

Kohli also thanked the fans for all the support and also expressed his firm belief of turning things around in the next season of IPL. 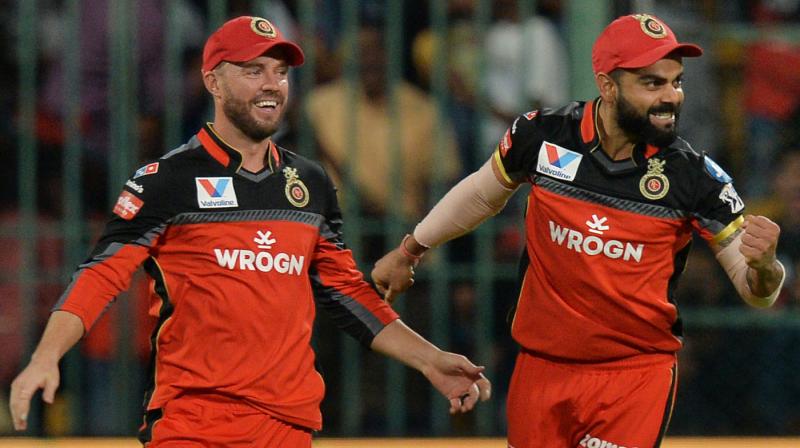 RCB will face Sunrisers Hyderabad in their last encounter of this season on May 4. (Photo: AFP)

New Delhi: Royal Challengers Bangalore did not qualify for the IPL playoffs and will be playing their last match of this season today, May 4.

However, when it comes to the fanbase, RCB has one of the biggest fanbases, and hence RCB skipper Virat Kohli and batsman AB de Villiers decided to thank their fans for all the support they have given them throughout their IPL journey.

The last game of the season is here and @imVkohli and @ABdeVilliers17 want you guys to know what’s on their minds. #PlayBold pic.twitter.com/GddTgzy2Zp

"RCB fans, thank you so much for the support throughout the season, you guys are incredible. Virat will agree to the fact that the last game with the rain, it was only a 5-over game but one of the most memorable games in my life and it wasn't even the result. Thanks to you guys," De Villiers said in a message posted by RCB's official twitter handle.

Kohli also thanked the fans for all the support and also expressed his firm belief of turning things around in the next season of IPL.

"This has to be a special message for you all because even after three hours of a game being washed out, you still sit in the stadium and give us the loudest cheer when we walk out to bat. That is very special. It is always going to stay special in our hearts and minds. Thank you for being the lovely fans that you are," he added.

RCB will face Sunrisers Hyderabad in their last encounter of this season on May 4.