Mumbai Indians became the third team to qualify for the IPL playoffs after registering a victory over Sunrisers Hyderabad in a Super Over. 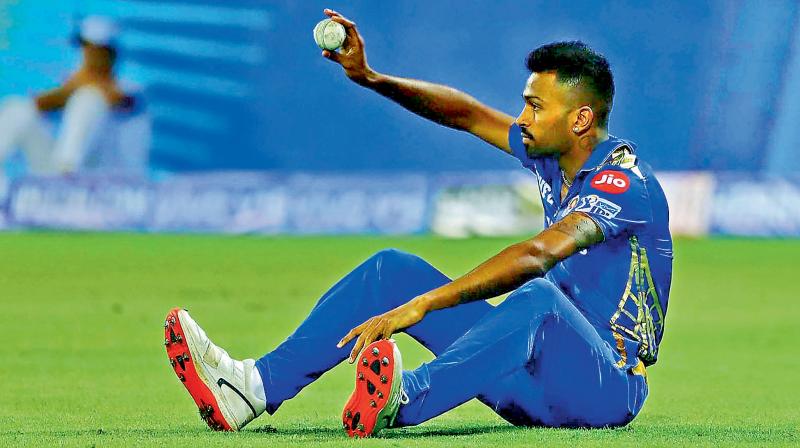 Pandya told Bumrah in a video posted by IPL official website. However, Bumrah replied that he does not want to confuse Pandya.

Mumbai: Mumbai Indians all-rounder Hardik Pandya revealed whenever he does something wrong during bowling, he wants Jasprit Bumrah to guide him.

"After the game he (Bumrah) was telling me that you should have bowled a slower bouncer and I told him in the game that you have to come if you think I am doing something wrong or you want me to do something, you should come,"

Pandya told Bumrah in a video posted by IPL official website. However, Bumrah replied that he does not want to confuse Pandya and want him to bowl whatever he feels like.

Mumbai Indians became the third team to qualify for the IPL playoffs after they registered a victory over Sunrisers Hyderabad in a Super Over and the credit goes to Bumrah, who restricted the visitors on just eight runs in the Super Over which Mumbai Indians chased easily.

Should the bowlers stop bowling to you? Bumrah asks Hardik

Good friends and Super'Over' heroes Hardik Pandya and Jasprit Bumrah discuss all that has led to Mumbai Indians' play-off qualification!

Bumrah, in the video, said that his mantra to perform well in the Super Over or in the game was to keep things simple.

"I was just focusing on what I have to do during the super over as well as whenever you are bowling in a tough situation, you try to back yourself as much as you can and try to keep things simple and that has always worked for me," Bumrah said.

Mumbai Indians will now host Kolkata Knight Riders on May 5.