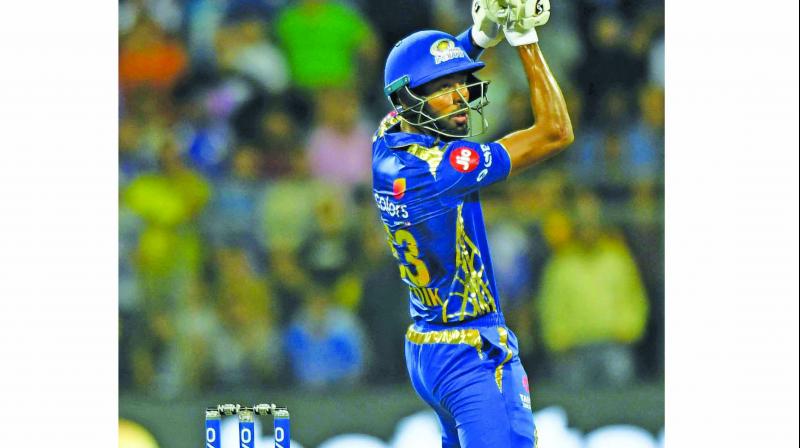 Mumbai: All-rounder Hardik Pandya played a brilliant cameo (25 runs off eight balls) and returned to bag three wickets to set up a 37-run win for Mumbai Indians over Chennai Super Kings at Wankhede stadium here on Wednesday. It was Mumbai’s second win in four games and CSK’s first defeat of the season.

Earlier, Suryakumar Yadav and Krunal Pandya resurrected Mumbai Indians with a 62-run stand for the fourth wicket in 49 balls before Hardik and Kieron Pollard (17 off 7 balls) fetched them 45 runs in last two overs including 29 off Dwayne Bravo’s to power Mumbai to 170/5. They were once struggling at 82/3 in 14 overs.

Pollard was brilliant in the field as he pulled off two stunning catches.

Yadav scored 59 off 43 balls while Krunal contributed a 32-ball 42 to provide a launch pad for Hardik and Pollard.

Put in to bat, Mumbai lost Quinton de Kock early and reached just nine runs in first three overs. Yadav got them going with five boundaries in two overs but it followed with brief lull. Ravindra Jadeja ended Rohit Sharma’s struggle in his first ball as Dhoni took a sharp catch. Rohit scored laborious 13 off 18 balls. Yuvraj Singh’s stay was shortlived as MI who were looking good at 39/1 after five overs were reduced to 50/3 in nine overs. Spinners Imran Tahir and Jadeja took control of the situation.

After a promising start, Yadav got into a bit of shell but Krunal who was promoted up the order kept finding an odd boundary. Krunal was dropped by Mohit on 17 to deny Bravo a wicket. An over later Krunal got another reprieve on successful lbw review. He played some lusty shots to give momentum to innings. However, both fell in quick succession but Hardik and Pollard finished the innings on a high.

CSK also got off to a terrible start losing both openers inside two overs. Australian pacer Behrendorff who bowled first over troubled visitors’ batsmen with pace and bounce.