Speaking about batting on the pitch, Coulter-Nile said: “I found it really hard, actually. 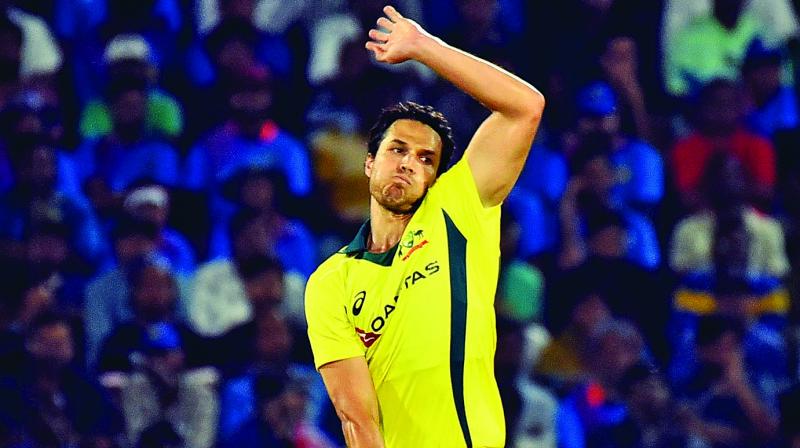 Hyderabad: The Australians may have lost the ODI series opener on Saturday night after sweeping the T20 series 2-0 but allrounder Nathan Coulter-Nile does not think it shifts the momentum greatly, with four more games to come.

“I don’t think it shifts too much,” he told reporters after the game.

“They’re 1-0 up in this series so they’ve got the upper hand but I think it was a closely-fought game. We played well, they played better in the end. The next four games will be even tighter I think,” the 31-year-old said.

He thought a few more runs could’ve helped the Aussies’ cause. “Maybe we were 20-30 runs short. Again, we didn’t take a couple of half-chances. I thought we bowled and batted pretty well; it was a tough wicket. It would’ve been nice having a set batsman going into the last 10 overs, but all in all we were just down a little bit in all areas,” he said.

The Australian credited MS Dhoni and Kedar Jadhav for their century partnership. “That was a hell of an innings from both of them, it was a great partnership,” he said. “We were in it, definitely. Zamps (spinner Adam Zampa) bowled beautifully, got the big wickets for us. Just a couple of things didn’t go our way, MS (Dhoni) chipping the ball in front of the fielders a few times and then there was a lot of class at the back end for him to get them home.”

Speaking about batting on the pitch, Coulter-Nile said: “I found it really hard, actually. I only batted for 10 overs. Kuldeep was spinning it quite big and the quicks weren’t really coming on to the bat. Obviously I wasn’t set, but I thought it might have been a little bit slower and turned a bit more for us at the back end there.”

He had high praise for Indian pacer Mohammed Shami. “He’s a fantastic bowler. He’s quality everywhere. At the back end he was really hard to get away, changed up well, nailed all his yorkers, didn’t give me anything to hit,” he said.

The big allrounder spoke of his own bowling too. “Sometimes you feel like you’re bowling really well and you take no wickets; other times you feel like the ball is coming out really poorly and you take 2 for 40 or whatever I did today. I’m getting better. Hopefully I can hit my areas longer, more consistently, in the next game,” he said.

He was also impressed with debutant Ashton Turner. “I was actually surprised he hadn’t played before — I thought he played last year. We haven’t seen the best of him but I promise you we will. At the back end, he will turn it on for us and he’ll get 60 off 30 balls. He’s an excellent player of spin and hits the ball a long way.”

Coulter-Nile sounded satisfied with the batting line-up. “I thought Stoinis at the top was fantastic, he batted beautifully, within himself. He was probably unlucky to get out the way he did, crunched one to mid-wicket. Next time he’ll probably just go over the top. Usman (Khawaja) is among the runs again. We’ve still got Shaun Marsh on the sidelines, he’ll come back in no doubt. How that restructures our batting line up I’m not sure, but that’ll be one for the coaches,” he said.