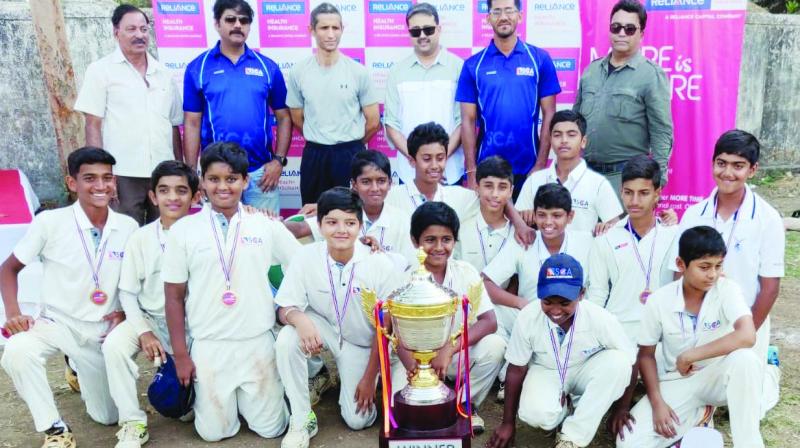 Player of the Series, Hrishikesh Gore receives a cricket kit as his winning prize from Nandan Phadnis.

Electing to bat first, Dilip Vengsarkar CA were restricted to 109 for 7 in their quota of 21 overs. Mayank Kardile (22) and Siddhant Mohite (18) tried their best to keep Dilip Vengsarkar CA on course for a good total, but SCA’s bowlers led by Saurish Deshpande (3/16) and Nihar Magre (2/11) bowled wicket-taking spells and gave nothing away.

In reply, SCA got off to a great start as their opener Aditya Baliwada scored a match-winning unbeaten 62 in 54 balls. He got solid support from his partner Omkar Patankar who scored a steady 25 off 31 balls. After losing Omkar’s wicket, Sanskar Panaskar joined Baliwada to help SCA convincingly win the final in 16.3 overs with nine wickets in hand.

The winners and runners-up received glittering trophies, while individual award winners were rewarded with cricketing equipments. SCA’s Hrishikesh Gore was adjudged the player of the series for his consistent and all-round performance in the tournament. The prizes were given at the hands of former Maharashtra Ranji trophy player, Nandan Phadnis, Reliance Health Insurance’s Marketing Head and Shamik Banerjee in presence of the trustees of SCA.