Cool Kedar Jadhav cranks it up

Jadhav says MSD’s presence gives him a lot of confidence. 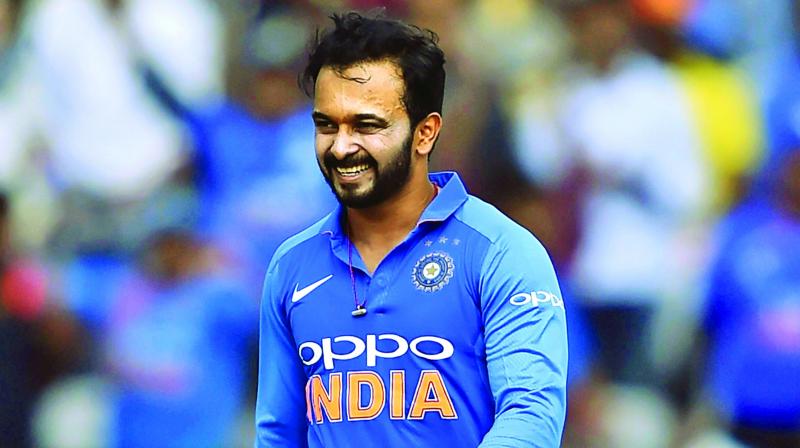 Hyderabad: After his unbeaten 81 fashioned India’s victory in the opening game of the five-match One-Day International series, middle order batsman Kedar Jadhav is flying high but is keeping his feet on ground nevertheless.

The 26-year-old batting allrounder, who rescued India from a precarious 99 for 4 via an unfinished 141-run partnership with former captain Mahendra Singh Dhoni, spoke to reporters after the match late on Saturday night.

On the victory: Every victory is valuable and adds to team’s confidence. It tells you how the team is progressing. We as a team have always believed in process more than the result and as long as you take care of that process everyday, you are bound to get consistent results.

On learning from Dhoni: Every time I bat or spend time with him, I learn a lot. I can’t exactly put it in words. He gives me a lot of confidence. He has the knack of getting the best out of every player and that’s what everybody loves about him.

On Dhoni and Kohli’s presence: Both of them are world class players and we are lucky that they were born in India, played for India and won everything. As a player you are learning everyday by watching how they prepare and how they challenge themselves in every situation. Credit to MS Dhoni and Virat Kohli for what they have achieved in their career. If we can achieve 10 or 15 per cent of what they achieved, it will be great.

On accelerating after his half-century: One of us had to take the risk. I have batted throughout my career at No. 4, so I’m more open to playing all the shots. I feel I have a good chance of converting those innovative shots. Mahi sticks to his natural game, hitting down the ground. That is where batsmen have more choices, playing down the ground. As long as he’s there, the other teams always feel the pressure. Whatever little bit of cramp he was having, I just told him ‘you staying at the wicket, gives me a lot of confidence’. I could play my natural game after 50 because he was at the other end.

On the plan against Adam Zampa: You cannot target a bowler in the middle of a 50 overs game. In the 25th over, you cannot take too many risky options. That’s what the game demands. The game wants you to play till the end. You cannot win a game by playing good against just one bowler. On a particular day, whoever is bowling well, you have to give respect and target the other bowlers who are not bowling up to that standard.

On his knack of breaking partnerships: I never thought of bowling 10 overs in a game as of now. If the situation demands and the team requires, I can definitely do. But to do that consistently, it will take mental as well as physically adjustment.

I know my limitations but as of now I’m just enjoying whatever bowling I get.

On restricting Australian to 236: I feel half the game was won when we restricted Australia, credit to our bowlers. Obviously, as a touring team, it is difficult to get into the groove from the first game. You have to adjust to the wicket and bounce.

On injuries/ consistency: It’s good to be consistently playing for India and doing well. It’s every cricketer’s dream and I am no different. I am enjoying my time in this team. Everybody is encouraging towards me irrespective of how many times I have got injured. Every time I have got fit, I have walked into the team. That was the confidence, the management had in me and that has helped me deliver consistently. Credit goes to the captain and management for backing me in my difficult times and this is my time to pay back.

On finishing at No. 6: It’s more than one-and-a-half or two years that I am batting at this slot. The management has been looking at me as a finisher. They are clear about everybody’s role.