South Africa were 60 for three at lunch in reply to England's first innings total of 269. 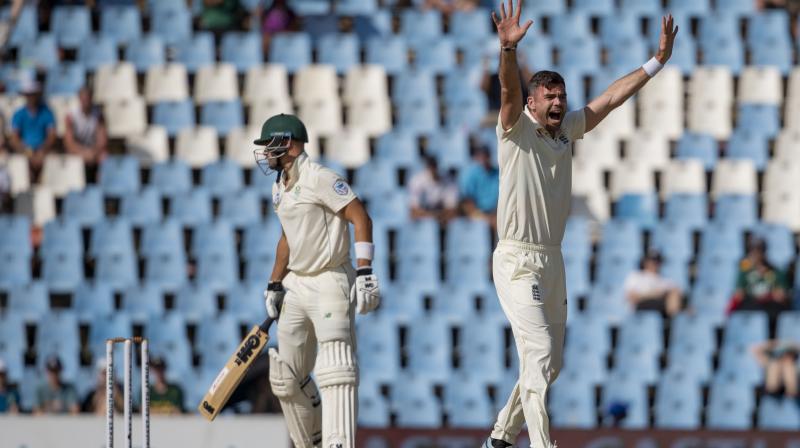 Veteran opening bowlers Stuart Broad and James Anderson struck early blows for England when South Africa started their innings on the second day of the second Test at Newlands on Saturday. (Photo:AP)

Cape Town: Veteran opening bowlers Stuart Broad and James Anderson struck early blows for England when South Africa started their innings on the second day of the second Test at Newlands on Saturday.

South Africa were 60 for three at lunch in reply to England's first innings total of 269. Opening batsman Dean Elgar was unbeaten on 35 at the break.

Broad took two for 12 in a hostile opening spell, dismissing new opening batsman Pieter Malan and Zubayr Hamza for five apiece. Anderson claimed the wicket of South African captain Faf du Plessis for one when he

replaced Broad from the Wynberg end with a moderate breeze at his back.

All three batsmen fell to catches in the slips with Broad and Anderson bowling a tight line and getting good bounce from the pitch. Broad was warned for landing in the 'danger area' of the pitch immediately before taking his second wicket.

Rassie van der Dussen's first scoring shot was a four off Anderson when he edged the ball through a gap between second and fourth slip, a gap which was immediately closed.

Van der Dussen was given out leg before wicket to Anderson two runs later but was reprieved on review because of an inside edge. He reached lunch on 10 not out.

England earlier added only seven runs to their overnight total of 262 for nine before Anderson was caught at slip off Kagiso Rabada, leaving Ollie Pope unbeaten on 61.