The cricket stadium has been named after Rohit Sharma. 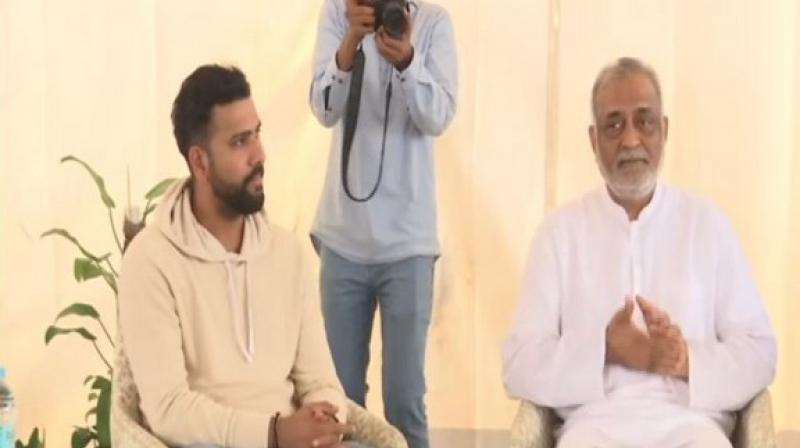 Star opening batsman Rohit Sharma on Friday laid down the foundation stone for an international cricket stadium and training centre at Heartfulness Institute on the outskirts of Hyderabad. (Photo:ANI)

Hyderabad: Star opening batsman Rohit Sharma on Friday laid down the foundation stone for an international cricket stadium and training centre at Heartfulness Institute on the outskirts of Hyderabad.

The cricket stadium has been named after Rohit Sharma and this facility will provide the youngsters at the institute to perfect their cricketing skills. The cricketer met the spiritual master of the institute, Kamlesh Patel (also known as Daaji) at the global headquarters in Kanha Shantivanam, Chegur, Hyderabad.

"As soon as I entered Kanha Shantivanam, I felt an environment of positivity. It is very true when you are close to nature there is so much positivity. My experience with heartfulness meditation has been amazing and I felt so light and so positive. There is so much negativity around and we need to increase positivity and meditation can certainly help," Rohit Sharma said.

"I want to bring some of my teammates to this place, one as a pristine getaway and two as a place for meditation," he added.

The Heartfulness cricket stadium is one amongst several infrastructural facilities being made available for the students of the institute and will allow them to train and play matches amongst themselves as well as competing teams. The cricket stadium will be 138 meters in diameters.

Commenting on the development, guide of the institute, Kamlesh Patel (Daaji) said, "Rohit Sharma like all great achievers in the world, he is an example of what the human mind is capable of doing when it becomes focused. It is quite apt for a cricketer of his ability to lay the foundation stone for the cricket stadium here and I am confident that some of the students of Heartfulness learning centre will be inspired by him".

Sanjay Sehgal, who is a working committee member of the Heartfulness centre, said that Rohit and Daaji had a wonderful interaction and also revealed that the guide of the centre had predicted that Rohit would become the top-cricketer in the world one day.

"Today, we had a very special guest, who is currently the vice-captain of the Indian side. Today he visited here to meet the guide of Heartfulness, it was wonderful for us to see, two masters of their domain interacted with each other. Daaji had observed that Rohit would very soon become the number one cricketer in the world," Sehgal told ANI.

"He learned meditation, he laid down the foundation stone, he has lent his name to the cricket stadium. We learnt from him as to how he has done meditation in the past. He mentioned about bringing his entire Mumbai Indians side here. He loved everything he saw here," he added.