In 38 matches, the 25-year-old pacer has scalped 51 wickets at 6.72, which is an exceptional figure in the shortest form of the game. 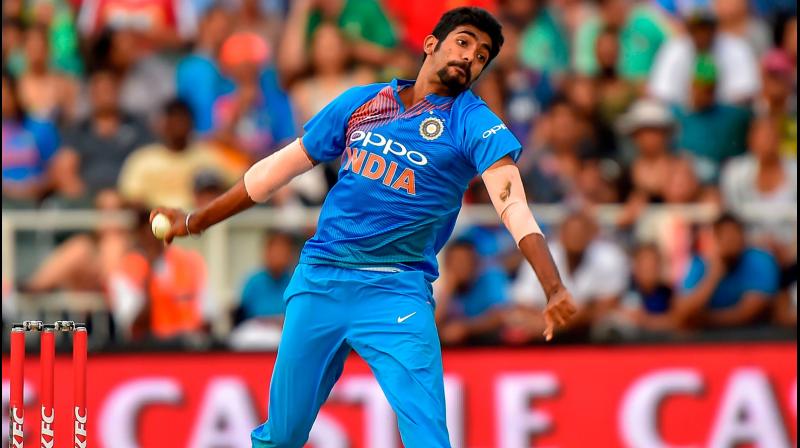 With India’s prime pacer, Jaspit Bumrah returning to the Indian squad after spending four months on the sidelines because of a back stress fracture, the ‘Men in Blue’ will be breathing a sigh of relief, especially when the 2020 T20I World Cup is just 10 months away. (Photo:AFP)

Mumbai: With India’s prime pacer, Jaspit Bumrah returning to the Indian squad after spending four months on the sidelines because of a back stress fracture, the ‘Men in Blue’ will be breathing a sigh of relief, especially when the 2020 T20I World Cup is just 10 months away.

Ahead of the T20I series against Sri Lanka, ICC's number 1 ODI bowler, Bumrah’s return to the Indian squad will boost the morale of his co-bowlers, who were hammered pretty badly at the hands of the West Indies’ batsmen.

During the home T20I series against the West Indies, bowlers like Washington Sundar, Deepak Chahar, Shivam Dube went for a plenty as the Caribbean batsmen hit the bowlers all over the park to give India a scare.

In the first T20I against the West Indies, the trio of Washington Sundar, Deepak Chahar and Shivam Dube was taken aback by the West Indies batsmen’s power hitting as batting troika of Shimron Hetmyer, Kieron Pollard and Evin Lewis nearly snatched the game away from India.

In the first of the three T20Is, Washington Sundar in his three overs, conceded 34 at an economy of 11.13, scalping just one wicket, while Deepak Chahar, in his four overs, gave away the highest amount of runs (56) at 14. Meanwhile, Shivam Dube conceded 13 in his single spell.

In the second T20I, the combination of the trio claimed just one wicket after conceding 97. And, in the last T20I, among the three pacers, Deepak Chahar managed to scalp two wickets. On the other hand, Shivam Dube conceded 32 at 10.67 in his three overs.

These facts and figures are enough to tell that without India’s number choice bowler, the squad looks vulnerable and depleted. Without Bumrah, the side is unlikely to defend a modest or even a huge total.

However, whenever Jasprit Bumrah is in the playing XI, the team ensures that it manages to contain the opposition from one end by taking wickets regularly. What we mean is – if Jasprit Bumrah fails to bag any wicket, he at least makes certain that no runs are leaked from his end.

If we look at the ODI’s number one pacer’s stats, we can see that his overall performance in the shortest format has been good, if not the best.

In 38 matches, the 25-year-old pacer has scalped 51 wickets at 6.72, which is an exceptional figure in the shortest form of the game.  His best bowling figures came against Zimbabwe in 2016, when he scalped three wickets after conceding just 11 at 4.83 from his quota of three overs.

After making his T20 debut in 2016, the Indian pacer has been brilliant. In August 2016, the pacer, during the T20I series against West Indies, claimed most wickets (28) in the T20Is in one calendar year, surpassing the record of former Australian pacer, Dirk Nannes.

In January 2017, in the second match of the T20I series of England's India tour, Bumrah played a major part in India's victory. He scalped two wickets and conceded just 20 runs in his quota of four overs.

Bowling in the slog overs, during the last over, he scalped two wickets conceding only two runs when England required eight to gain victory. Following his performance, he was awarded the Man of the Match (MoM) award.

Bumrah’s performance in the Indian Premier League (IPL) has been satisfactory. So far, the Yorker specialist has scalped 82 wickets from 77 games. The Mumbai Indians (MI) bowler registered his career best figures in the IPL, when he produced a match-winning spell of 3/7 in three overs.

His spell of 3/7 took MI into the finals of the 2017 IPL and also gave his best in the final to help the Rohit Sharma-led side lift the trophy for the second time.

Nonetheless, as the T20I World Cup inches closer, India need to determine who will be the final bowlers in their playing XI. Besides, determining the final bowlers, the squad also need to look care of the workload of their prime bowlers, especially with the 2020 IPL scheduled to take place in April.

Before India head for the 2020 T20I World Cup, which is scheduled to takes in Australia in November, the Virat Kohli-led squad also must see that their main bowlers, including Jasprit Bumrah doesn’t get injured during the IPL or during any series, especially after the IPL concludes.