Virat Kohli has been protected to a large extent by performing openers in Vijay, Dhawan and Rahul. 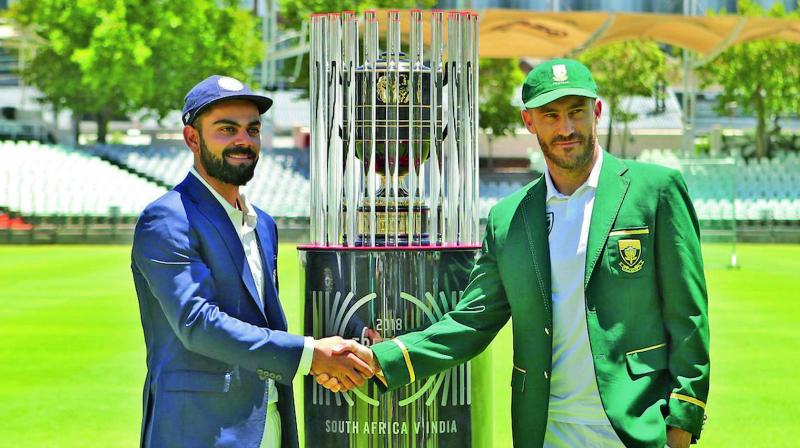 This will be Virat Kohli’s toughest test yet. South Africa is as different from India in the cricketing sense as chalk and cheese. This is one country that has defied India’s best efforts to win a Test series for a clear 26 years since the Indians became the first tourists to be welcomed to the reborn Republic after being shorn of apartheid. The playing conditions are not anathema to strong Indian teams equipped with quick bowlers who can move the ball around. But they call for team work that has been beyond India’s reach despite sending some of the finest sets of batsmen.

Kohli’s team has a great chance to break the jinx as the young and determined side has an arsenal of fast bowlers who are quick as well as clever and who can move the ball substantially off the pitch, which is what really counts in those conditions. The home side prefers hard pitches, but their curators use so much moisture in making the playing surfaces there that the ball can move around noticeably for a couple of days or more. The new ball becomes a real weapon as movement comes with very good bounce and carry as in Australia.

The penetrometer reading is somewhat more important on SA pitches. To read it right and assess the moisture and determine whether it is worthwhile putting the opposition in may be critical to the fortunes in a Test. The larger question will probably be about whether the Indian batting can stand up to a possible four-man SA attack, with a fragile Dale Steyn back in it and raring to go, in the opening Test at Newlands. If the Indians come through the opener unscarred after standing up to a barrage of fast bowling that has to be faced chest-high rather than knee-high as in the comfort of a long home season, they could spring a surprise.

The feeling is universal that this Team India attack can do well enough to be a formidable force even if Faf du Plessis & Co. are adept at negotiating the movement on pitches which can be trusted for even bounce. The point is can the Indian batting stand up consistently to the challenge on a foreign tour when we know that India, like wine, has a history of travelling poorly. Of course, a somewhat top heavy batting lineup would be leaning heavily on Kohli, the man in cracking form. He is inured to carrying the batting but at no time would his form be such a defining factor as in this series.

Kohli has been protected to a large extent by performing openers in Vijay, Dhawan and Rahul. How the Indian openers cope with the new ball would probably be the biggest determining factor of success in this series. Had all three been fit, it would have made sense to play all of them at the top of the order. Pace on SA pitches can be that demanding. Pujara is in great form too, which is why the pressure was never intense on Kohli save in the rain-hit Test he had to hold the second innings together against Sri Lanka after the batting had come undone in the damp of the Eden Gardens. The top order has to click for India to prosper and how Team India fixes the men at the top would hold the key. Of course, those who bat best off the backfoot can expect to fare better in the southern hemisphere pitches, particularly in Australia and South Africa. That is an old lesson of cricket.