Alas, the four-day fixture which concluded on Saturday did not quite pan out as expected on several counts. 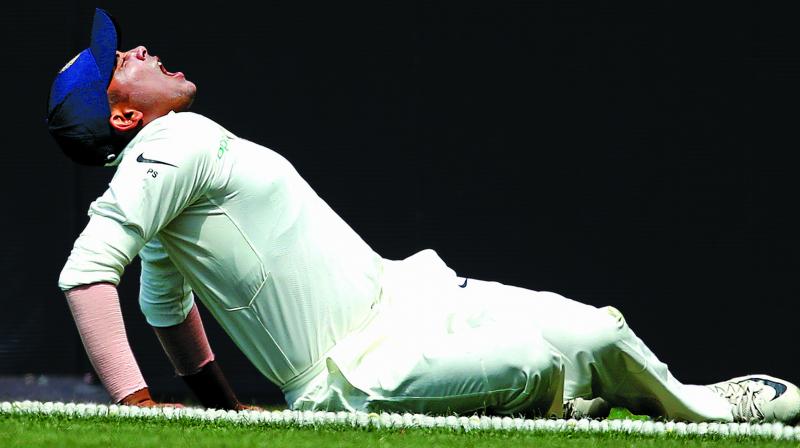 Prithvi Shaw grimaces in pain after injuring his ankle during a warm-up game in Sydney. (Photo: AP)

Chastened by the experiences in South Africa and England, India were eager to have a tough, demanding warm-up match leading into the first Test. Alas, the four-day fixture which concluded on Saturday did not quite pan out as expected on several counts.

First up, rain lopped off one day from the match which obviously affected the Indians who were looking for more time for the bowlers and batter to acclimatise. This bad luck was compounded by the quality of the opposition and how India fared.

The team picked by Cricket Australia was made up of fairly undistinguished players which reduced the purpose of the match, at least where the Indians were concerned in assessing the form of their own players.

But here too India did not emerge with shining colours, despite some useful scores put up by the top order what with the CA XI thwarting the Indian bowlers for 151 overs and even taking a massive 186 runs first innings lead.

However, the unkindest blow was the ankle injury to Prithvi Shaw which cost the team the ebullient and in-form opener, at least for the first Test, and threw the composition of the playing XI into turmoil.

Shaw, who turned 19 only recently, is seen as something of a prodigy and had begun his Test career with a sparkling century against West Indies a few weeks back.

In this warm-up match, he had shown quick adaptability and smashed a strokefilled half century that not only reiterated his good form, but also made him the first choice opener for the series.

His injury was serious enough for him to miss the first Test starting next Thursday. It remains to be seen whether Shaw will recover in time for the second Test, but his absence will have riled Virat Kohli who would have been looking for a strong start to the series.

How the two teams perform in the first Test will likely dictate the tenor, perhaps even the fate of the series, and Shaw was pivotal to India’s gameplan at the top of the order.

His attacking instincts and wide repertoire of strokes was something India would have been counting on to stymie the pace threat of Starc, Hazlewood and Cummins.

Something similar to what Virender Sehwag did in 2003-04 and 2008. Barring the brilliant Kohli, India’s batting was shown up as extremely fragile in South Africa and England largely because of poor starts. Without Shaw, that threat becomes more acute.

M. Vijay and K.L. Rahul, who are tipped to open at Adelaide, made runs, but these came in the inconsequential second innings with competitive interest in the match waning so how much weightage should be assigned to them would be vexing the team management.

Shaw’s injury could lead to two significant decisions. One, if medical advice suggests he could struggle to make it for the second Test too, India would want to draft in another opener with Shikhar Dhawan and Mayank Agarwal (currently in New Zealand with India A) into the squad.

Second, if the team management thinks the batting has become wobbly, the gameplan may have to be revised, and India may want to take the field with seven batsmen, including Rishabh Pant.

That these were squandered is besides the point. Kohli will now not only have to work out a different strategy of taking wickets while also ensuring that the workload on his main bowlers does not lead them to break down.

On the eve of the first Test, therefore, India appear to have moved two steps backwards while taking one step ahead. Not quite the way Kohli would have liked to start.

Women’s cricket in royal mess
Meanwhile, back home the Mithali Raj controversy rages. Coach Ramesh Powar, who was at the centre of her diatribe emailed to the BCCI, has come up with his own version of events that queer’s the pitch further.

Who’s right or wrong is for those in authority to investigate and decide. But frankly the blame game does no credit to any of the people involved: Powar, the COA, BCCI, Harmanpreet Kaur and Mithali herself.

All it shows is that women’s cricket in India is in a right royal mess. Mithali and Harmanpreet might wonder if it wouldn’t have been better to sit across the table and sort their differences out.