In a first of its kind incident, international cricketers wore anti-pollution masks while fielding due to poor air quality in New Delhi. 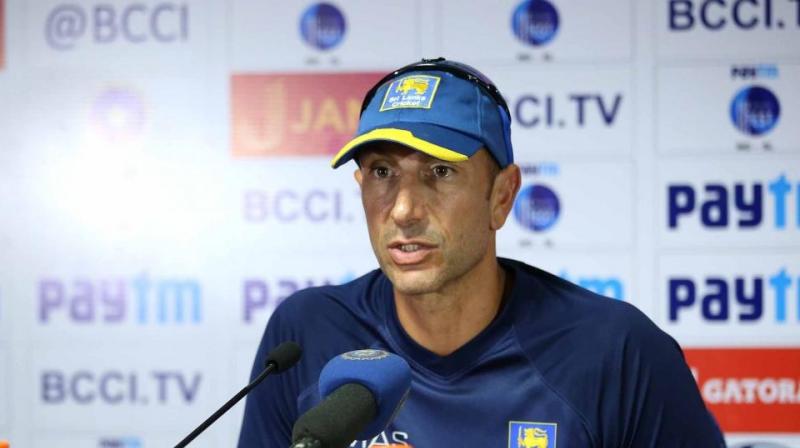 With players complaining of uneasiness, there were multiple interruptions resulting in loss of 26 minutes of play, forcing India to declare their innings at 536 for seven. (Photo: BCCI)

New Delhi: Seeking to validate their demand regarding suspension of play due to air pollution, Sri Lanka's interim coach Nic Pothas said their bowlers badly struggled to cope with the conditions and even threw up in the change room. In a first of its kind incident, international cricketers wore anti-pollution masks while fielding due to poor air quality in the national capital.

With players complaining of uneasiness, there were multiple interruptions resulting in loss of 26 minutes of play, forcing India to declare their innings at 536 for seven.

Sri Lanka did come out to bat and scored 131 for three. "Obviously, it is well-documented that Delhi has high level of pollution. They had got extremely high at one point, we had players coming in at one point and vomiting,” Pothas said at the end of day’s play.

Breathlessness and irritation in the lungs are common phenomenon in the pollution-hit cities but vomiting is something rare associated with smog. "The pace bowlers obviously were struggling, Suranga Lakmal and Lahiru Gamage in particular. The match referee (David Boon) was in our change room when Suranga was vomiting. Doctors were there as well.

"Dhananjaya de Silva was also vomiting. It was tough. You rely on doctors to give you medical advice because you are not medical person,” Pothas said. The coach said that it was a unique situation where players suffered in an abnormal manner.

"There were oxygen cylinders in the dressing room (common practice during every international sport). It is not normal for players to suffer in that way while playing the game. From our point of view, it had to be stated that it is a very, very unique case," Pothas said

Asked as to what transpired, he said, "We had only 10 people (on the field) at one stage as there were not enough people to get on the field. The umpires were very clear where they were coming from. I don’t envy them. Their position was tough as well. There aren’t too many rules written on pollution."

But he did agree that when Angelo Mathews batted, the situation was easier. "I haven’t spoken to him (Angelo) still whether it was hard or easy to bat. When our guys were struggling, the numbers were at 400 out of 500 on the pollution scale. At the end of the day, now they are around 300. I presume it was easier."

Pothas however gave an open-ended answer when asked whether there will be play tomorrow if the situation remains same. "That’s in the hands of Match Referee and Umpires. I am sure they will put in place some sort of precedence if that happens tomorrow again.”