Former India U-19 World Cup skipper Garg scored his maiden IPL fifty and with Sharma raised a 77-run stand for the fifth wicket. 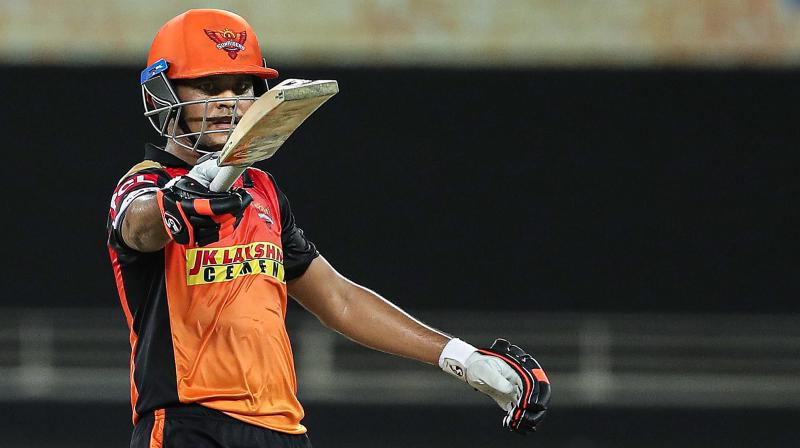 That Abhishek Sharma is talented is already known and the southpaw further enhanced his reputation with some confident and cracking shots. Priyam Garg (in pic) too found his touch as he spent time at the crease and went on to score his maiden IPL fifty. (Photo | PTI)

Dubai: There was no end to Mahendra Singh Dhoni and Chennai Super Kings' woes as the former India captain yet again struggled to take his side past the finish line, falling short by seven runs against Sunrisers Hyderabad in an IPL match, here on Friday.

CSK controlled the first innings for a large part before youngsters Priyam Garg (51 not out) and Abhishek Sharma (31) lifted SRH to a competitive 164 for five after electing to bat.

Their top guns not contributing much, former India U-19 World Cup skipper Garg scored his maiden IPL fifty and with Abhishek raised a 77-run stand for the fifth wicket. SRH collected 53 runs in the last four overs to make it a contest.

Playing a record 194th IPL game, the stage was set for Dhoni to silence his critics but all he could manage was 47 runs off 36 balls as CSK fell short.

Coming to bat at number five, Dhoni had enough balls at his disposal, a manageable target and a trusted aide in Ravindra Jadeja (50) for company but again his attack came too late.

It was Jadeja who took CSK closer to the target before getting out while Dhoni struggled in their 72-run stand for the fifth wicket.

Except for a few hits, Dhoni struggled to time the ball. He also lost steam towards the end, having batted in hot conditions for over an hour. He hit Khaleel Ahmed for a massive six in the 19th over, which had to be completed by him because Bhuvneshwar Kumar hurt his leg after bowling just one ball.

CSK needed 28 runs from the final over and skipper David Warner handed the ball to 18-year-old J and K spinner Abdul Samad. It was a gamble which paid off. Samad started with a wide that yielded CSK a boundary but held his nerves to see his side through.

SRH spinners, specially Rashid Khan deserve the credit for the win. The Afghan was, as usual exceptional, as he choked CSK with his well-measured deliveries. He did not get a wicket but conceded only 12 runs his four overs.

It was the third defeat in a row for CSK in four matches, one of the worst starts for the three-time champions.

Bhuvneshwar sent back Watson (1) while Natarajan spoilt the comeback of Rayudu (8). Garg, after a splendid knock, struck Du Plessis run out.

Afghanistan's Rashid Khan choked the runs with his ever-reliable leg-spin while Jammu and Kahsmir's Abdul Samad got rid of Kedar Jadhav (3).

CSK needed 96 runs from the last six overs and some quick runs upfront would have helped them.

After struggling in their initial matches, CSK brought in Ambati Rayudu, Dwayne Bravo and Shardul Tahakur for Friday's game.

That CSK came into the match rejuvenated following a one-week break was evident with the way Deepak Chahar (2/31) troubled the SRH batsmen with his swinging deliveries. Sam Curran too showed control.

Chahar was rewarded for his effort when he deceived Jonny Bairstow (0) with an in-swing ball that uprooted his stumps.

Manish Pandey (29) was in good touch as he timed the ball nicely when pitched up and did not hesitate to play lofted shots while Warner worked the ball around. They managed 42 runs off the Powerplay overs.

Pandey drove straight to Curran at mid-off off Thakur.

Realising that time is ticking away, Warner tried to look for big shots but fell when Du Plessis, jumped perfectly to catch him near the boundary ropes. To make it worse for SRH, Kane Williamson (9) was run out next ball in a mix up with Garg.

The responsibility to carry the team forward fell on the young shoulders of Garg and Abhishek, who did not disappoint.

That Abhishek is talented is already known and the southpaw further enhanced his reputation with some confident and cracking shots.

Garg too found his touch as he spent time at the crease and went on to score his maiden IPL fifty.