Sports   Cricket  03 Oct 2020  Kohli says he got time to get over his lean patch because his team performed well
Sports, Cricket

“It’s something you need to understand (bad form) but when the team is doing well, you get more time to apply yourself,” Kohli said. 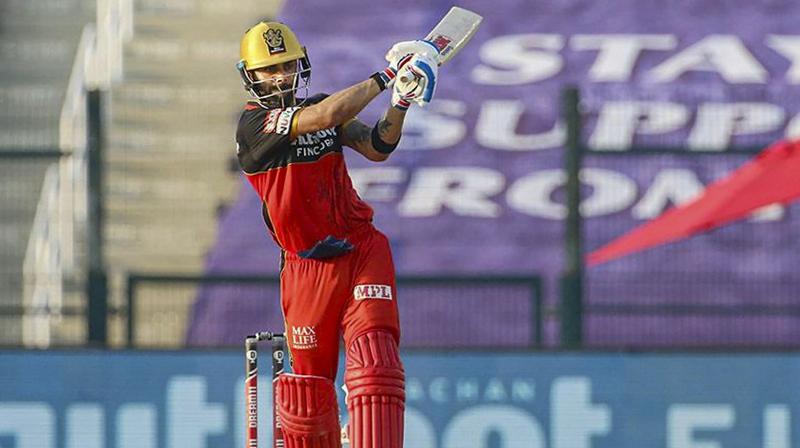 Kohli struck 72 not out off 53 balls to lead RCB to an easy eight-wicket win over Rajasthan Royals for their third win from four matches. He had scored 14, 1, 3 in the earlier matches. (Photo | PTI - edited)

Abu Dhabi: Back to form with an unbeaten fifty, Royal Challengers Bangalore captain Virat Kohli on Saturday said his teammates’ good show gave him enough time to come out of a short lean patch in the ongoing IPL.

Kohli struck 72 not out off 53 balls to lead RCB to an easy eight-wicket win over Rajasthan Royals for their third win from four matches. He had scored 14, 1, 3 in the earlier matches.

“It’s a funny game, an amazing game and I was telling Jos that I love this game and hate it too. It’s something you need to understand (bad form) but when the team is doing well, you get more time to apply yourself,” Kohli said after the match.

“Very important two points. The kind of game we had last time, it’s very important to back that up. It was warm, but coming from Dubai, this felt better because of the breeze.”

Kohli was pleased that his side has begun the tournament well but said they need to keep the momentum going.

“This tournament can get away from you very quickly. When you start losing initially, the games start going quickly and suddenly you realise eight games are gone and you don’t have points.”

He praised the 20-year-old Devdutt Padikkal, who yet again came good, scoring his third fifty in four matches.

“There wasn’t much to reveal (to Devdutt) and I told Simon this guy has got serious talent - reach, and a great eye.

“And a left-hander, very clean shots. You hardly feel he’s taking risks, you get that feeling rarely at this level. Today he carried from 40 to 65 odd, so he’s a smart guy and he understands the game well.”

Padikkal, on his part, said it was “an unreal feeling” to bat with Kohli, whom he has been following for a long time. He said he was getting tired towards the end due to the heat.

“He (Kohli) just kept pushing me. I was getting tired, cramping up, but he pushed me. He said I need to see the team through. That’s how he bats and he was conveying that to me too.

“I’m just playing on merit, watching as closely as I can and making a decision. It was hot, especially after fielding for 20 overs it was difficult to bat.”

Yuzvendra Chahal, who was adjudged man-of-the-match for his 3/24 to restrict RR to 154/6, said he was able to flight the ball more as the ground was big.

“When you come into bowl and get a wicket in the first over, it makes you confident. They take less chances and then I just vary the pace. I think Sanju’s wicket was the most special one.

“The wicket was slow. These boundaries are good for spinners. I miss Chinnaswamy, but here you can bowl the googlies and the wide ones, and on the leg side because the boundaries are bigger.”

Royals captain Steven Smith rued about his side not scoring enough runs after electing to bat.

“We could have done a lot better. It was a good wicket but we couldn’t get a partnership together. Jofra bowled exceptionally, our leggies bowled well,” he said.

“Our top 3 should be doing the job a lot more. The last two games it’s cost us. We bat quite deep, but our top 3 need to bat longer and get ourselves into the innings.”

Smith praised Mahipal Lomror, who made 47 to help RR go past the 150-mark.