Hanuma Vihari feels excited to play in his home ground

The 25-year-old Andhra batsman was awarded the man-of-the-match for his century and half-century in India's 257-run win in the second Test. 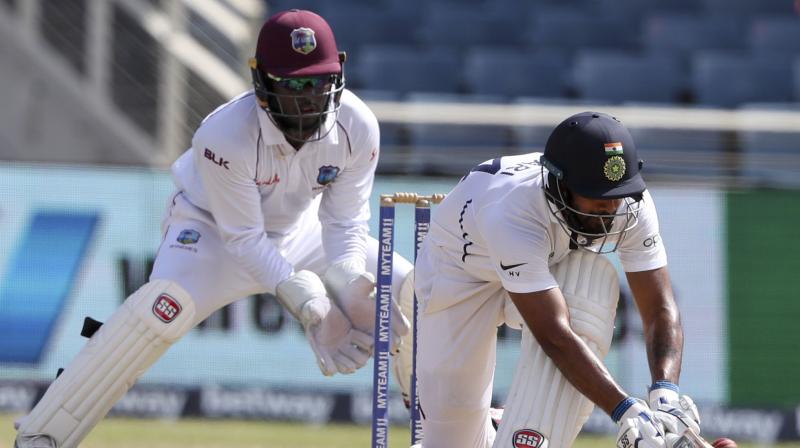 Hanuma Vihari has played all his six Test matches outside India and is now eagerly looking forward to the series against South Africa next month. Vihari emerged as India's top run-getter against the West Indies in the two-Test series with 289 runs. (Photo:AP)

Kingston: Hanuma Vihari has played all his six Test matches outside India and is now eagerly looking forward to the series against South Africa next month, his first on home soil.

Vihari, who emerged as India's top run-getter against the West Indies in the two-Test series with 289 runs, was satisfied that his patience on tricky surfaces has paid off.

"I have not played a Test at home, looking forward to it. It's great to play in front of the home crowd back in India," said Vihari, who is expected to feature in the first Test against the Proteas on his home ground in Visakhapatnam.

The 25-year-old Andhra batsman was awarded the man-of-the-match for his century and half-century in India's 257-run win in the second Test.

In fact, he was itching to get one after missing out by seven runs in the first game.

"It feels great to score my maiden Test century. I missed out on a hundred in the last match, so I was focusing on a big score this time. We were 200 for 5 and that was my goal while batting with Rishabh (Pant)," Vihari said at the post-match presentation ceremony.

"We had to be patient on this wicket as there was something in it for the fast bowlers. I was trying to take calculative risk against spinners, that was the game plan and it worked well for me."

Opposition skipper Jason Holder, however, was clueless after another poor batting display by his team.

"Obviously disappointed, we didn't play a complete game of cricket in both the games. We need to put up the scores and fight out those tough periods, it's a tough question on how to fix the batting. It's an individual thing, we need to take ownership of our performances."

He, however, praised the bowlers for their effort.

"The bowlers gave their 100 per cent as we've been on the field every single day of this Test series, and the bowlers have delivered. It's been a heavy workload on the bowlers, and at no point have they dropped their heads," said Holder, who took six wickets in the second Test.

Holder gave credit to Indian batsmen for making them work hard for those wickets.

"They knew our bowling was good - they made us work hard for those wickets. They are a quality side and they played quality cricket, we didn't bat well enough. That's the quality of their side.

"As a batsman, you need to get in, only then it gets easier. You had to work hard for your runs."