Virat's remarks came after India's 257-run victory over Windies in the second Test of the two-match series here at Sabina Park. 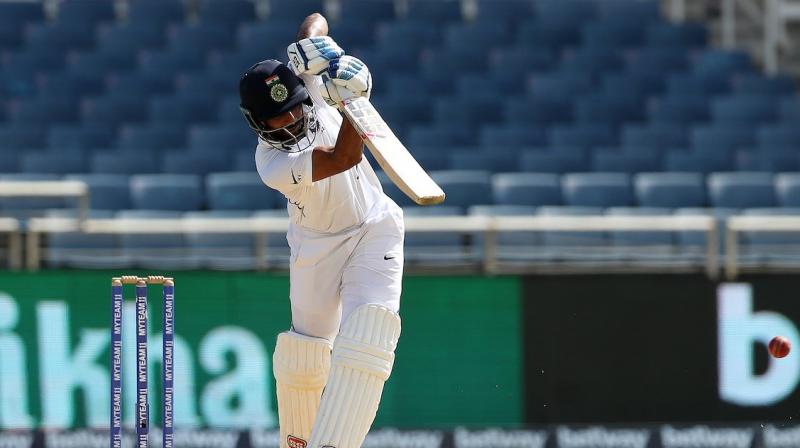 After winning the two-match Test series against Windies, skipper Virat Kohli praised batsman Hanuma Vihari, saying the player was the find of the series for the team. (Photo: BCCI/TwitteR)

Kingston: After winning the two-match Test series against Windies, skipper Virat Kohli praised batsman Hanuma Vihari, saying the player was the find of the series for the team.

His remarks came after India's 257-run victory over Windies in the second Test of the two-match series here at Sabina Park. With this win, Kohli became the most successful Indian Test captain, surpassing MS Dhoni.

"I think the find of the series has to be Hanuma Vihari. The way he has batted under pressure especially, his skills were outstanding, his temperament was top-notch. Bowlers were outstanding. Ajinkya Rahane came back into form and it was very pleasing to see," Kohli told reporters.

He praised pacer Jasprit Bumrah and went on to call him one of the "most complete bowlers in world cricket" at present. He also said that the bowling attack of the current Indian team hunts in packs and that is very pleasing to see as a captain.

The 25-year-old Bumrah scalped six wickets in the first innings, including a hat-trick, and became the third Indian to achieve the feat after Harbhajan Singh and Irfan Pathan.

"We are very lucky to have Jasprit Bumrah. Very rarely you find a pack of bowlers who are hunting together. If you see Bumrah today, he had a bit of a niggle, but other bowlers stepped up. When Bumrah gets momentum, you know what he can do. He was ruled as the T20 specialist when he came in, but he has proven people wrong. He has shown there is no set template in world cricket, if you have the right attitude, you can excel in any format," Kohli said.

"I have not seen many spells as Bumrah bowled in the first innings. Standing at slips, you can feel for the batsmen because Bumrah bowls with such precision. He has to be one of the most complete bowlers in world cricket today. He wants to be the best bowler in the world, he takes control of his diet, his skills," he added.

All-rounder Ravindra Jadeja had a good showing with both bat and ball in the series as he managed to score 75 runs and take five wickets in the two-match series.

"Jadeja has been our most consistent and accurate bowler outside India. He gives you control and stability. He is always in the game, he gives you strength in the fielding department as well. You can see he wants to do a job for the team," Kohli said.

Windies batsman Darren Bravo was hit on the head by a bouncer bowled by Bumrah on the third day of the Test. The batsman seemed to look fine on the day, but today he had to be ruled out of the match due to concussion.

Jermaine Hamilton was named as the concussion substitute and Kohli said that it makes sense to have this change in the longest format of the game.

"We are looking forward to the Test series against South Africa. I know it would not be easy, we would be put under pressure. We just love playing Test cricket, we just want to improve as a side," Kohli said.

With the series win, India moved to the top of the World Test Championship with 120 points.

This series victory was the eighth consecutive series win for India over Windies.