Craig Overton will replace Woakes, who only took one wicket in each of Australia's innings in England's extraordinary one-wicket win. 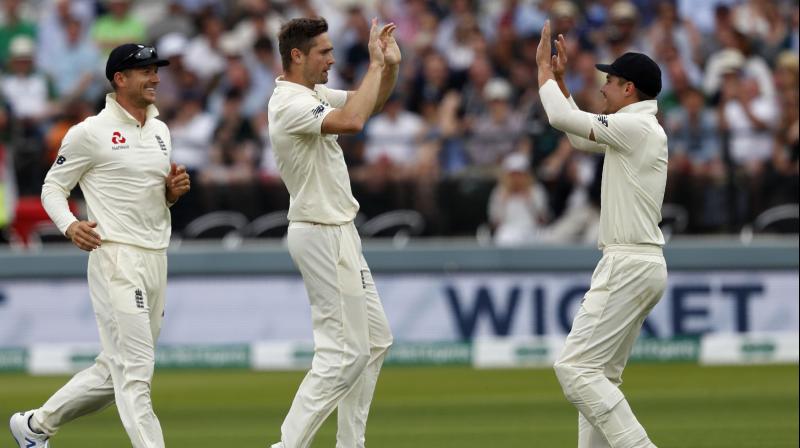 The series is level 1-1 with two tests remaining (Photo: AFP)

Manchester: England has dropped allrounder Chris Woakes and gone with a new-look batting order for the fourth Ashes test against Australia starting on Wednesday at Old Trafford.

Seam bowler Craig Overton will replace Woakes, who only took one wicket in each of Australia's innings in England's extraordinary one-wicket win in the third test inspired by Ben Stokes' final-day 135 not out.

Joe Denly will replace Jason Roy as the opening partner for Rory Burns, with Roy dropping down to No. 4, England captain Joe Root said Tuesday. Root will still bat at No. 3.

Steve Smith will return for Australia after recovering from the effects of a concussion, while top-order batsman Usman Khawaja and pace bowler James Pattinson have been dropped.

Smith did not play in the third test at Leeds because of a delayed concussion from a bouncer from Jofra Archer that hit Smith in the neck in the drawn second test at Lord's. Smith scored 144, 142 and 92 in his three innings in this series so far.

The series is level 1-1 with two tests remaining.

Khawaja has a series average of 20.33, with his top score of 40 coming in the second innings of the first test won by Australia at Edgbaston.

Marnus Labuschagne is expected to take Khawaja's No. 3 position in the batting order with Smith to slot back into his customary No. 4.

Mitchell Starc has also been named in the squad and is in contention to play his first test of the series.

"The decision on the 12th man will be one of the bowlers," he said. "We're very clear what the batting is."

Langer said the players were still reeling from the dramatic ending to the third test, where a victory would have seen Australia retain the Ashes.

"We felt like we got our Ashes stolen," Langer said. "Now we've got to work out what we're going to do."