Kohli dismissed speculations of a rift with Rohit Sharma calling the reports ridiculous and baffling lies. 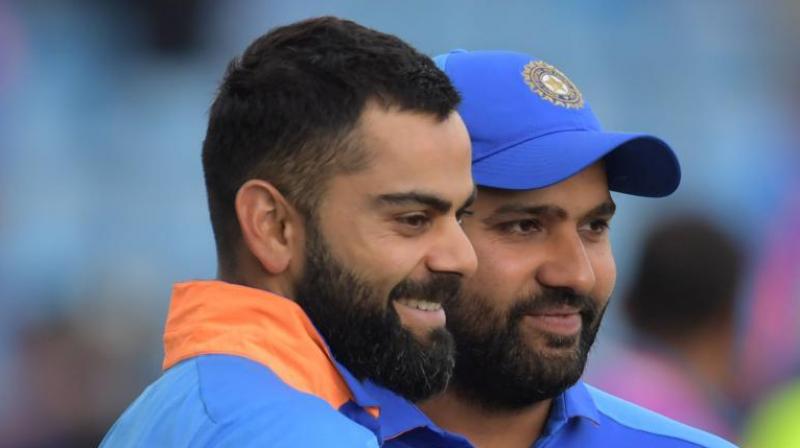 Both Kohli and Rohit are currently sitting at the top of the list, tied on 20 half-centuries each. (Photo: AFP)

Mumbai: The Men in Blue are set to return in action on Saturday as they take on West Indies in the first T20 International of the three-match series in Florida.

The T20 series against Windies will give a chance to Virat Kohli and Rohit Sharma to lead the race for most half-centuries in the shortest format of the game.

Both Kohli and Rohit are currently sitting at the top of the list, tied on 20 half-centuries each. New Zealand's Martin Guptill, who has 16 T20I fifties to his name is third in the list.

While Kohli has only taken 67 matches (62 innings) to achieve the feat of scoring 20 T20 half-centuries. On the other hand, Rohit has amassed the same number of half-centuries in 94 matches (86 innings).

The duo has been in news recently for off-field reasons as there were rumours of a rift between the two.

Kohli dismissed speculations of a rift with Rohit Sharma calling the reports ridiculous and baffling lies, insisting that he has no issues with his deputy.

"In my opinion, it's baffling, ridiculous to read such stuff, we're feeding lies," Kohli said with coach Ravi Shastri by his side, who also termed the rumours as "nonsense". Kohli had insisted that his relationship with Rohit is fine.