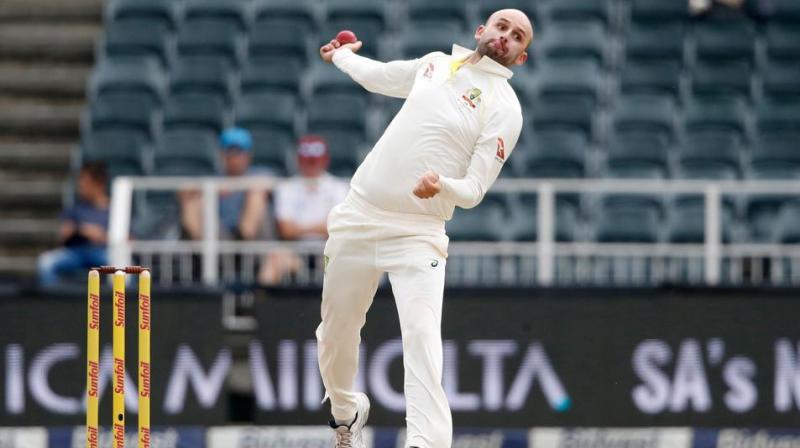 Nathan Lyon took two wickets in an over as Australia finally saw the back of Rory Burns during an England collapse in the first Ashes Test. (Photo: AFP)

Birmingham: Nathan Lyon took two wickets in an over as Australia finally saw the back of Rory Burns during an England collapse in the first Ashes Test at Edgbaston on Saturday.

England were 328-8 at lunch on the third day, a first-innings lead of 44 runs, with Chris Woakes 13 not out and Stuart Broad 11 not out. They had been hoping to build a substantial first-innings advantage but from 296-5 they lost three wickets for four runs in slumping to 300-8.

Ashes debutant Rory Burns was caught behind off the bowling of off-spinner Lyon for 133, his maiden Test century, after a superb feat of endurance that saw the opener spend nearly eight hours at the crease.

England resumed on 267-4, 17 adrift of an Australia total of 284 built on Steve Smith's superb 144 in his first Test since completing a 12-month ban for ball-tampering.

But England had a hundred hero of their own in Burns, 125 not out after batting through the whole of Friday's play. Ben Stokes was unbeaten on 38.

In a match where umpires Joel Wilson and Aleem Dar had both seen several decisions overturned, Burns had enjoyed a lucky break when given not out on 21 in response to an lbw appeal from Lyon.

Replays showed the ball would have hit the left-hander's leg stump, but Australia decided against a review.

Stokes got England going on a sunny Saturday morning with an on-driven four off James Pattinson after the fast bowler came round the wicket. A quick single then saw Stokes to a 95-ball fifty featuring eight fours.

But Stokes was out for exactly 50 to the next ball he faced when he cut loosely at Cummins and was caught behind by Australia captain and wicketkeeper Tim Paine.

Stokes, in his first match since being restored to the England vice-captaincy following an acquittal on a charge of affray last year, shared a stand of 88 with Burns that had taken England to 282-5.

New batsman Jonny Bairstow gave England the lead when he clipped Pattinson for four through midwicket. Burns only managed three runs in Saturday's first hour, before driving Peter Siddle for a four through cover-point.

But Lyon, who had repeatedly beaten Burns's bat on Friday, finally ended the Surrey captain's marathon innings when a delivery that turned and bounce took the outside edge and was well caught by Paine.

By contrast, new batsman Moeen Ali lasted just five balls before he inexplicably shouldered arms to Lyon and was clean bowled for a duck -- the eighth time the spinner had dismissed him in 10 Ashes innings.

Then 300-7 became 300-8 when Bairstow's reckless shot outside off stump against paceman Siddle was well caught at first slip by David Warner. England now led by just 16 runs, with their two batsmen in the middle -- Woakes and Broad - then each on nought.

But Woakes, on his Warwickshire home ground, hoisted Lyon for a legside six to the delight of the crowd.