Virat Kohli has played a big role in my small career: KL Rahul

Rahul struck a solid 57 before being run out following a mix up with day one centurion Cheteshwar Pujara. 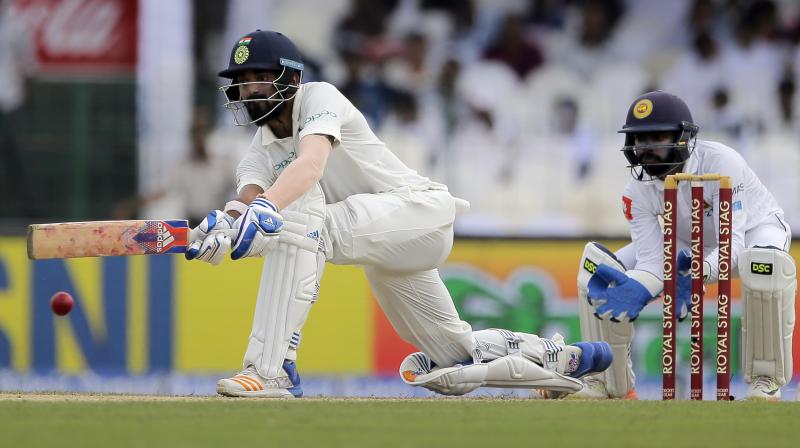 Rahul returned to action in the second Test after missing the series opener due to viral fever. (Photo: AP)

Colombo:  Indian opener KL Rahul has hailed India captain Virat Kohli for supporting him during his tough times he has endured in his short international career.

Rahul returned to action in the second Test after missing the series opener due to viral fever. He made instant impact, scoring a solid 57 before being run out following a mix up with day one centurion Cheteshwar Pujara.

After the day's play, Rahul said that the knowledge that his place in the playing eleven is secure as Kohli had put it in the pre-match interaction helps him during his repeated recovery phases.

"It makes a massive difference. It gives me so much confidence, not just now but even after the surgery the support staff, the coaches, the boys were constantly messaging me and saying whenever you are ready, get ready sooner, the team misses you and small things like that make a lot of difference," said Rahul.

"That kept me motivated, that woke me up each morning to go to physiotherapy and do my boring rehab. It gives you confidence that team is backing you, team trusts you, waiting for you to come back into the team and that makes a big difference and I come back with lot more confidence.

"I can walk into the team with ease in my head, there is no pressure me losing my position which is great and which the captain and coaches have always given me that support which has played a big role in my small career so far," the opener said further.

Rahul is no stranger to injuries or illness, and he has been in/out of the Indian team in his short 18-Test career.

In fact, hardly a season has gone past since his debut in 2014 when he has not been out of the team nursing some or the other injury. It has obviously made a serious impact on a young and promising player.

When asked to compare the wait due to injuries with the time before he made his Test debut, he replied, "I think this is a lot more difficult because in physical injuries, you want to do a lot of things.

"We as sportsmen, we're not used to just sitting at home and being at home all day. We want to go out, we want to play sport, we want to be in the gym, want to train, we want to hit balls, and when you're not physically able to do that, it's
really tough. It starts playing on the mind a lot more.

"I have kind of gotten used to this. More than playing for a long time, I have been in and out of the team because of injuries. It's never easy to come back.

"It takes you a couple of games to get back into your groove as an opening batsman, understand where your off-stump is, to understand what pace you have to play at, how many shots are too many shots, how slow is too much slow - there are a lot of things, a lot of doubts in your mind if you keep going out and coming back in. But I have enjoyed the challenge," said Rahul.

Rahul was immaculate in his innings on day one at the SSC and was well placed to break his drought of hundreds, when he was entangled in a mix-up with Pujara who went on to score 128 not out.

The opener said that he is not yet at a desperate stage to convert these missed chances into hundreds, although he is left ruing too many such moments.

"I wanted to be in the middle, play as many balls as I could, as many days as I could if I could bat. I was disappointed about that. I was looking good and just after lunch, a crucial time as a batsman, you can capitalise and get a lot of runs during that session. So I was disappointed that I got out at that time," he
said.

Rahul has scored four hundreds and seven fifties so far and he admits that he should have converted more starts.

"I've never chased numbers, firstly. My job as an opening batsman is to give the team a good start, lay a solid foundation and I think I've done that so far.
"Disappointing that I have not been able to convert that, but I think that will keep me hungrier.

"Each time I go back to bat, I will want to get more and more runs. I am not cautious about numbers right now, but maybe if this keeps going it might start playing on my mind.

"But nothing changes, you feel a lot more confident, you're seeing the ball a lot better, so you want to maybe play a little bit more positively. All the answers to the questions I will only find when I'm in the middle and when I get a
hundred. That's when I'll know what the right process is and  how I need to go about my innings," he stated.

"It was on the slower side and I think it will take turn as the days go. The more the footmarks, the more turn and purchase Ashwin and Jadeja can get," he concluded.