Opting to bat first, openers Shikhar Dhawan and KL Rahul stitched a decent 56-run stand to provide their side with an initial thrust. 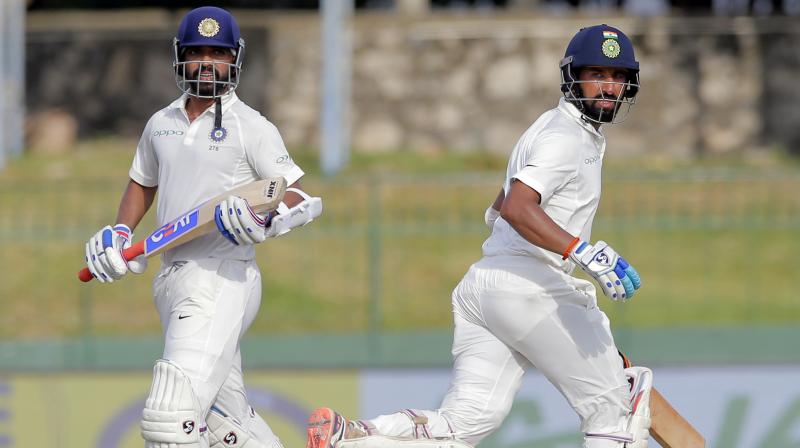 Colombo: Cheteshwar Pujara and Ajinkya Rahane struck scorching centuries each as India attained a strong position on the opening day of the second Test against Sri Lanka at the Sinhalese Sports Club Ground here in Colombo on Thursday.

Opting to bat first, openers Shikhar Dhawan and KL Rahul stitched a decent 56-run stand to provide their side with an initial thrust.

However, Dhawan, who returned to Test cricket with a 190 run knock in the Galle Test, got out LBW off the bowling from Dilruwan Perera at this individual score of 35.

Rahul and Pujara then stitched a 53-run partnership before the opener was caught in a mix-up and got run-out at 57.

India lost their skipper Virat Kohli cheaply for mere 13 runs as he was brilliantly caught at slips.

Subsequently, Pujara, who is playing his 50th Test, produced a brilliant batting performance as he went on to score a blistering unbeaten knock of 128 runs, including 10 boundaries and a six.

He was ably supported by Ajinkya Rahane (unbeaten at 103) as the duo stitched a massive 211-run stand for the third wicket to guide the visitors to 344-3 at the close of play.

For Sri Lanka , skipper Rangana Herath and Kusal Perera chipped in with a wicket each.

Lanka, who are trailing by 0-1 in the three-match series following their 304-run defeat in the first Test , will aim to bounce back and try to restrict India to as minimum as possible on day two.