KL Rahul notched up his sixth fifty in as many consecutive innings, thus equalling the likes of Rahul Dravid and Gunduppa Viswanath. 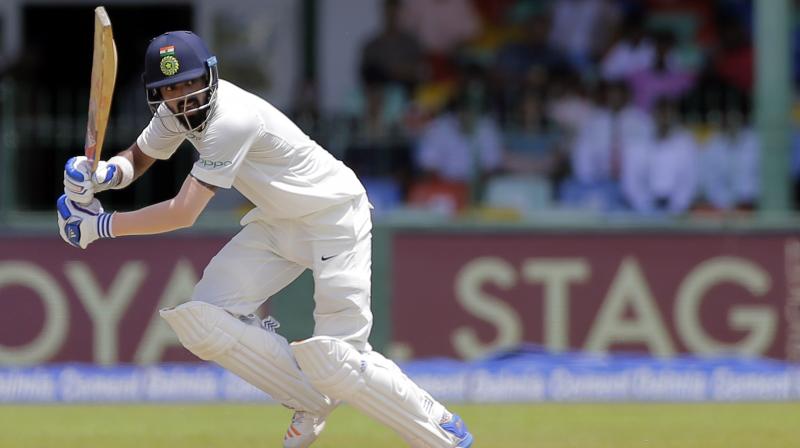 KL Rahul notched up a well-paced 57 against Sri Lanka at the Sinhalese Sports Club. (Photo: AP)

Playing only his 18th Test match, Rahul, who is currently making a comeback to the national side after a long layoff due to a shoulder injury, followed by a bout of flu, notched up the eighth 50 of his career in the first innings of India’s second Test against Sri Lanka at the Sinhalese Sports Club, in Colombo.

With this half century, KL Rahul notched up his sixth fifty in as many consecutive innings, thus equalling the likes of Dravid and Viswanath in this feat.

Rahul, who has scored 57, had started his half century streak against Steve Smith’s Australia at the Chinnaswamy Stadium in his hometown Bengaluru, where he scored a 90 and a 51, in a 75-run victory for India. He followed that up with a first innings 67 in the drawn Ranchi Test (did not bat in the second innings), and another 67 and 51 (not out) in Dharamsala, against the Aissies.

Interestingly, Rahul became the fastest Indian (18 Tests) to achieve this feat; he also became the first India opener to score six consecutive fifties in Test cricket. Another half century in the second innings would help the Karnataka batsman level-up with Australian cricketer Chris Rogers, who scored seven fifties against India and Engalnd in 2014/15.