It was 87-year-old Charulata Patel, who became an internet sensation after she was spotted cheering for India with tricolour painted on her face. 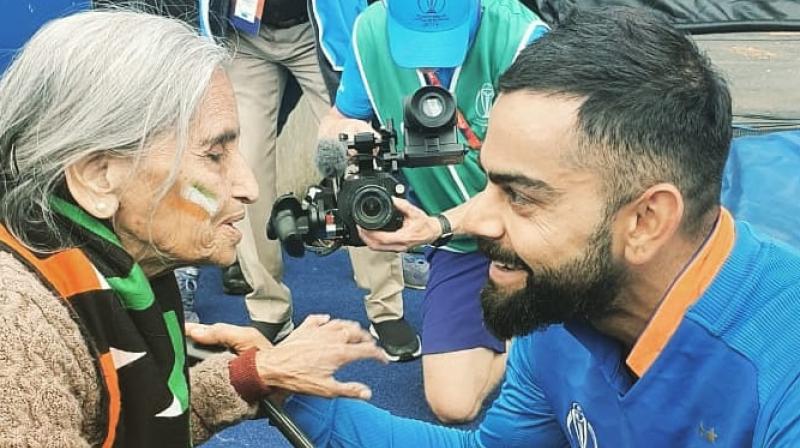 Mumbai: The crowd at the ongoing World Cup has not failed to deliver some epic moments on the television. One such moment was witnessed during the match between India and Bangladesh in Birmingham on Tuesday.

During the India innings, when the batsmen were entertaining the crowd with their stroke-making abilities, one fan was spotted blowing the vuvuzela with so much enthusiasm that it was declared as the best shot of the tournament by commentators Harsha Bhogle and Sourav Ganguly.

It was 87-year-old Charulata Patel, who became an internet sensation after she was spotted cheering for the Men in Blue with tricolour painted on her face.
After the match, she also got the opportunity to meet the Indian stars as well.

In an interview with the ICC insider Ridhima Pathak, Patel said: “I am 87 years old. I like cricket because my children used to play in Surrey County. I was born in Tanzania. My parents are from India that’s why I have so much pride for the country. I have been watching cricket since I was 20 years-old. I feel like they [the players] are my kids and that’s why I am supporting them. About all the attention, I am feeling a little shy, must have done some 4-5 interviews now!”

Cricket really is for all ages!

How amazing is this?!

India's top-order superstars @imVkohli and @ImRo45 each shared a special moment with one of the India fans at Edgbaston.#CWC19 | #BANvIND pic.twitter.com/3EjpQBdXnX

One of #TeamIndia's passionate fans, Charulata Patel ji all smiles as she blesses @imVkohli for the remainder of the tournament. #CWC19 pic.twitter.com/DQyEzt5dDH

Also would like to thank all our fans for all the love & support & especially Charulata Patel ji. She's 87 and probably one of the most passionate & dedicated fans I've ever seen. Age is just a number, passion takes you leaps & bounds. With her blessings, on to the next one. 🙏🏼😇 pic.twitter.com/XHII8zw1F2

Man of the match: Rohit Sharma

Woman of the match: Charulata

An off-field memory I will never forget. 😌 https://t.co/Yb1hYHhdv5

87 year old Charulata Patel who was seen cheering for India in the stands during #BANvIND match: I have been watching cricket for last many decades, from the time I was in Africa. Earlier I used to watch on TV when I was working, but now that I am retired I watch it live. #CWC19 pic.twitter.com/VL1P3k6czs

Could go down as one the best player-fan moments of all time. https://t.co/LYdQxCPwbN

87 year old Charulata Patel is bringing such special moments to the #INDvBAN #IndiaVsBangladesh match - people are taking selfies with her at the match - all set to be a social media sensation? #charulatapatel #cricket pic.twitter.com/nc17a005tE

If you thought only young people can be passionate supporters #CWC19 pic.twitter.com/58Y8nj8iVI

Stunning visuals at the #IndiaVsBangladesh match today. Captured this picture. It has to be the best picture of the entire tournament. Salute for her spirit nd energy 👏 @StarSportsIndia @ICC pic.twitter.com/ey0fSIi5h0

Cricket is a madness in India , from the moment you are born to as long as you live and breathe. pic.twitter.com/wC6UpozNkA