Virat Kohli ‘doing fine’ after hurting his thumb during training

Virat Kohli, albeit in a lighter vein, explained why he has not bowled in international cricket since December 2017. 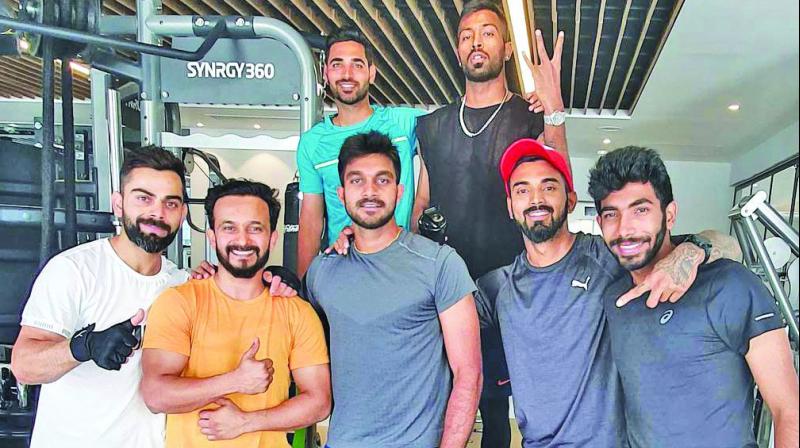 Members of Team India pose after a gym session at Southampton on Sunday. (Photo: Twitter)

Southampton: India captain Virat Kohli “is doing fine” despite being hit on his thumb in a training session ahead of the team’s World Cup opener against South Africa here on Wednesday.

“He is doing fine. There is nothing to worry,” team sources said. Kohli hurt his right thumb during practice at the Ageas Bowl here on Saturday, prompting physiotherapist Patrick Farhat to attend to the Indian skipper.

Farhat was first seen using magic spray on the thumb and then applied tape on it. Later Kohli was seen leaving the field with his thumb dipped in a glass of ice.

India, one of the favourites for the title, were hit by injuries in the run up to the World Cup. While all-rounder Vijay Shankar had to sit out of the warm-up game against New Zealand after hurting his elbow, Kedar Jadhav is still recovering from a shoulder injury he picked up during IPL and missed India’s both warm-up games against the Kiwis and Bangladesh. Jadhav, a key figure in India’s middle-order, batted in the nets on Saturday, an indication that he could be fit in time for the game against South Africa.

No one in team takes my bowling seriously: Virat Kohli

He broke many a records with his batting but Virat Kohli, the medium-pacer, could have had a lot more than eight international wickets if his teammates believed in his bowling ability like he himself does.

Kohli, albeit in a lighter vein, explained why he has not bowled in international cricket since December 2017.

“It was the during the ODI series in Sri Lanka (in 2017) where we had almost won everything, I asked MS (Dhoni) if I could bowl. Just when I was getting ready to roll my arm over, Bumrah (Jasprit) shouted from the boundary and said ‘no joking around, it is an international game’.

“No one in the team believes in my bowling but I do. After that I had back issues and then never bowled (in the middle),” said the Indian captain in an interview.

Kohli, however, still bowls in the nets, most recently in a practice session here earlier this week.    He has taken four wickets in ODIs and as many in T20s. He has bowled 163 balls in Test cricket.

Having made significant recovery from his shoulder injury, Kedar Jadhav’s active participation in successive net sessions augurs well for the Indian team even though he remains a doubtful starter for the World Cup opener against South Africa.

The Indian team management will certainly feel relieved after the 33-year-old had two full-fledged net sessions since India’s arrival at this port city.

Jadhav has batted without any apparent discomfort during the sessions, which was a fair enough indication that he is nearing full fitness. He has also started bowling in the nets, something he was not doing during the IPL due to his dodgy hamstring.

While it is still not clear whether Jadhav will be considered for the opening game against South Africa on Wednesday, his fitness has been a cause of concern since he is expected to play an important role for India during the next six and half weeks.

He had hurt his left shoulder during the last IPL round robin league game for Chennai Super Kings against Kings XI Punjab and did not play the final phase of the tournament.