Dhoni’s CSK look to consolidate their position at top of the table. 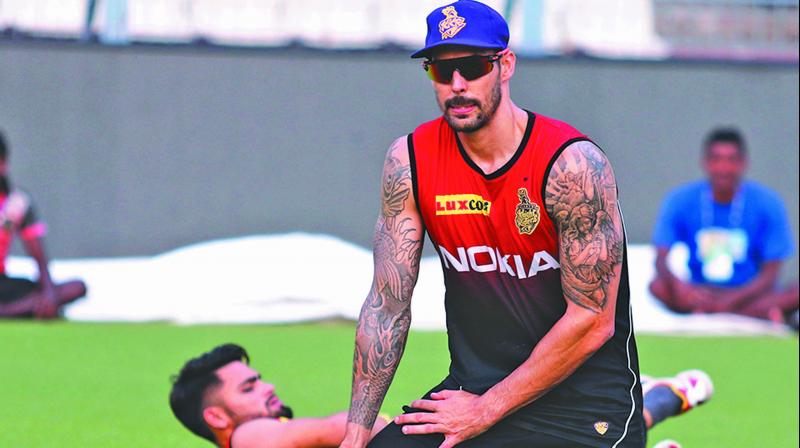 Kolkata: On song after making a superb comeback to the league, table-toppers Chennai Super Kings would look to continue their winning momentum and spoil Kolkata Knight Riders’ homecoming in an IPL match, at the the Eden Gardens on Thursday.

Written off at the start with critics branding their dugout as an ‘old-age home’, CSK, on the field, never looked like a side who are making their comeback to the tournament after serving a two-year suspension.

With a vintage M.S. Dhoni in centre of the team’s batting might, CSK have started looking ominous and would look to make a firm grip of their lead atop the standings as the tournament heads to the business end. CSK are currently leading the eight-team table with 12 points from six wins out of eight games. Both the teams are here on the back of two morale boosting wins against Delhi Daredevils with KKR successfully chasing a modest 176 in Delhi, while CSK reigning supreme at their adopted home in Pune.

Half-centuries from Shane Watson and Dhoni blasted CSK to their third 200-plus score and then young fast bowlers Lungi Ngidi and K.M. Asif choked Delhi’s chase to hand CSK their sixth win of the season. Dhoni himself is in the middle of the CSK’s success with his batting and captaincy instincts. Dhoni made four changes against Delhi and it showed the team’s depth.

Ngidi looked reliable and penetrative both in power play and at the death as the South African brought some venom into the pace department in absence of injured Deepak Chahar.

A product of the MRF Pace Foundation, Asif impressed with his raw pace and quick arm action and took two wickets on debut, though the young Kerala pacer leaked 43 runs in three overs.

In batting, Watson, who struggled for Royal Challengers Bangalore last season, has been a revelation. Backed by Dhoni, the veteran Australian all-rounder slammed this season’s highest score — 106 — his fourth T20 hundred.

Ambati Rayudu too has gone about his tasks quietly, be it as an opener or in the middle-order to lead the batting chart with 370 runs.

Then there is vintage Dhoni himself. Dhoni averages 71.50 with three half-centuries.

His knock of 70 not out from 34 balls to hunt down RCB’s 205 still remains the talk of the town. The way he sealed the game with his signature swing over wide long on boundary brought back memories of the 2011 World Cup triumph.

With a handsome 12-7 win-loss record, the Dhoni-led side will also give some more headache to KKR.

In the mid-table with six matches to go, KKR cannot afford to lose at Eden Gardens, where they play three more, in its bid for to secure a maiden playoff berth under Dinesh Karthik.

KKR’s campaign, so far, has been hugely dependent on the overseas trio of Chris Lynn, Andre Russell and Sunil Narine.

Lynn was the architect of KKR’s win in Bangalore with a restrained knock after he got a reprieve on seven.

KKR would hope for a strong batting show, especially from Robin Uthappa who is in the middle of a lean patch and is yet to score a half-century. KKR also seemed to have under-utilised youngster Shubman Gill by sending him lower down the order. Batting at no. 7, the Under-19 World Cup star has scores of 3, 6, 14 not out, 37, 5 not out in what seems to be sheer waste of talent.