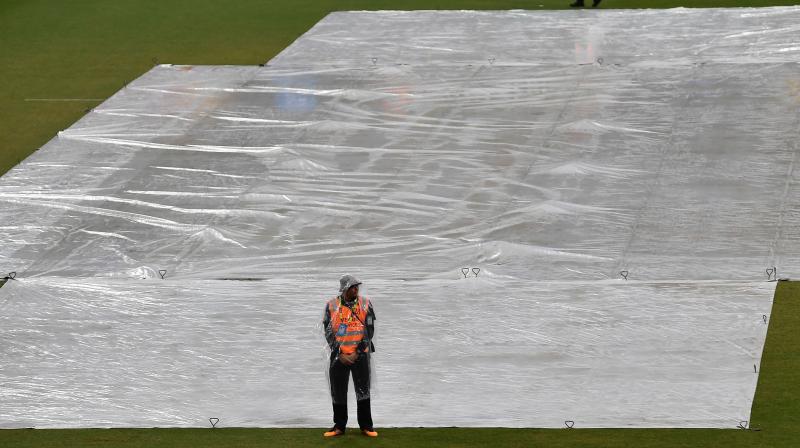 Covers are placed on the field as rain stopped play during the Twenty20 women's World Cup game between Pakistan and Thailand in Sydney on Tuesday. AFP Photo

South Africa topped Group B with seven points after the last preliminary game against 2016 champions West Indies was washed out by rain on Tuesday, giving each team a competition point.

The four semi-final teams were already determined on Monday when Australia edged New Zealand by four runs in Melbourne to place second behind India in Group A.

All that hinged on the last day of group games was the order in which South Africa and England would finish, and the composition of the semis. Thailand got to bat against Pakistan before their last group game was washed out by rain.

India won all four pool games, including a tournament-opening win over Australia, to earn the right to take on No. 2 in Group B in the first of the semifinals on Thursday at the Sydney Showgrounds. That sets up a rematch of the 2017 50-over women's World Cup final, which England won.

South Africa finished unbeaten to top Group B with three wins and a draw to set up the semifinal against injury-hit Australia. Top-ranked all-rounder Ellyse Perry has been ruled out of the tournament with a hamstring injury in a major setback for host Australia.