Mahendra Singh Dhoni was determined to prove that he was far from it. 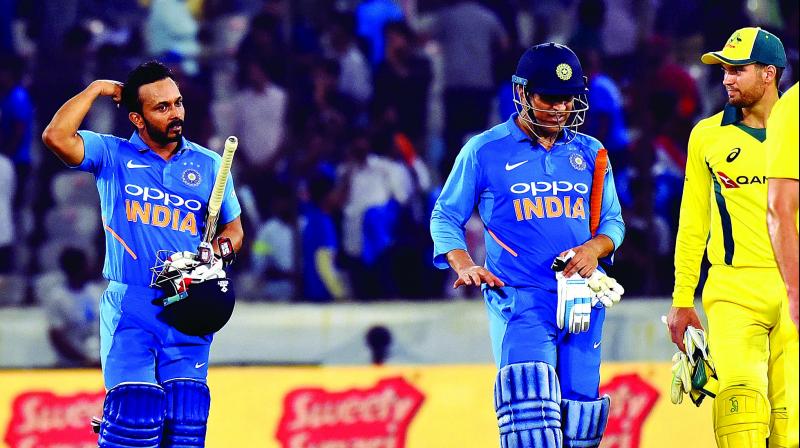 Kedar Jadhav scored an unbeaten 81 against Australia in the first ODI at Hyderabad on Saturday. (Photo: S. Surender Reddy)

Hyderabad: Only recently did they say he was finished, yet again. Mahendra Singh Dhoni was determined to prove that he was far from it. He made a telling statement by scoring a defiant unbeaten half-century and getting involved in a pugnacious partnership with Kedar Jadhav down the middle to script a six-wicket win for India that gave the hosts a headstart in the five-match One-Day International series against Australia here on Saturday night.

Chasing a modest 236, the Blues were in the red at 99 for 4 in the 24th over when the former captain got together with Jadhav. The two took time to settle down before gradually going about getting the runs to push the visitors out of the game with an unfinished 141-run stand for the fifth wicket.

A composed Dhoni dug in 59 that came off 72 balls and was decorated with six boundaries and a soaring six while Jadhav contributed an unbeaten 81 in 87 balls, nine of which raced to the boundary and one went flying over it.

Opener Rohit Sharma (37) and captain Virat Kohli (44) had put India on track with a 76-run stand for the second wicket after Shikhar Dhawan departed for a duck but the Aussies hit back by taking three wickets for 19 runs to claw their way back into the game, only to hit the Dhoni-Jadhav wall.

Earlier, the visitors went on a roller coaster. They lost captain Aaron Finch with nothing on the board, then consolidated before making a late rally to end up with a below-par total.

Opener Usman Khawaja scored a half-century that was greeted by a smattering of applause from the near-full crowd but soon fell, trying to force the pace off Chinaman bowler Kuldeep Yadav only for Vijay Shankar at deep mid-wicket to bring off a good running catch to end his 76-ball knock that contained five boundaries.

Marcus Stoinis too did well to make 37 when the urge to accelerate did him in, Kohli taking the catch at deep midwicket off slantline spinner Kedar Jadhav.

Peter Handscomb (19) was hoodwinked by a crafty one from Kuldeep as he leapt out of his crease to step up the scoring rate. The ball beat him in the air and off the pitch as it cut back and landed in Dhoni’s gloves which garbled the stumps.

Glenn Maxwell surprisingly walked into a loud cheer from the crowd, thanks to his whirlwind match-winning century in the previous game (the second T20) between the two countries in Bengaluru. The ‘Big Show’ got away while on 10 when a thick edge off Bumrah flew between wicketkeeper Mahendra Singh Dhoni and Rohit Sharma stationed at first slip — Rohit was moved from mid-on to the slip only two balls earlier. The right-hander was looking dangerous, timing the ball very well and in good nick until Shami got one through his defences to send his off-stump for a walk and trigger wild celebrations in the stands. The allrounder’s entertaining 40 was embellished with five hits to the fence.

Debutant Ashton Turner turned a good bet for Australia and did pretty well until he was a trifle slow to react to a sharp one from Shami that shattered his stumps. He made 21.

Next man Alex Carey was the other batsman to impress. He got together with No.8 Nathan Coulter-Nile to put on 62 runs for the seventh wicket.