Sports   Cricket  03 Feb 2020  Kohli looks a much secure captain than he was
Sports, Cricket

Kohli looks a much secure captain than he was

What was more commendable was that inspite of Bumrah going a bit awry, skipper Kohli gave him the ball in both overs of the eliminators. 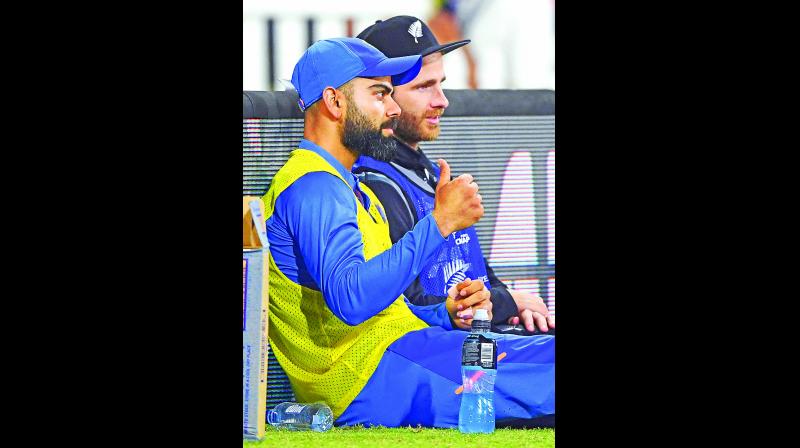 Virat Kohli & Co. have made a strong statement. The side that landed bleary eyed in the southwestern Pacific Islands and were put straight to the test by playing the first T20 at Auckland, is now bright and bushy-tailed having won the T20 international series 5-0 a feat never achieved by any Indian side across all formats of the game.

The two wins at Hamilton and Wellington, both going into super overs adding to the excitement, is proof of the mindset that the team has. In both matches, India came back from the brink and turned the game their way in the final over. In the first, it was Mohammed Shami who showed he has ice running in his veins while in the second game, a relatively inexperienced Shardul Thakur shut the door on the Kiwis who had looked like running away with the game.

In both matches, the usually consistent Jasprit Bumrah ran off his tested track and was punished severely by Kane Williamson at Hamilton and in the two overs he bowled in the eliminators. When your lead bowler struggles the others need to provide the back up which Shami and Thakur did admirably.

What was more commendable was that inspite of Bumrah going a bit awry, skipper Kohli gave him the ball in both overs of the eliminators.

Today, Kohli looks a much secure captain than he was in many series preceding those played in the past. One sees him willing to bat lower down the order to give inexperienced players like Shivam Dube a chance to bat higher. There were many experts who had opined that Kohli should bat at number 4 at the International Cricket Council World Cup 2019 in England to settle down India’s middle order issues.

Kohli continued to bat at his favourite position, number 3, and the team kept experimenting throughout the tournament which saw India lose the semi-final to the Kiwis by 18 runs. Giving an opportunity to KL Rahul to come in at the third position against Australia in the first ODI against Australia at Mumbai and getting Dube to bat at that position at Hamilton, in the third T20 against the Kiwis shows he is willing to give others a chance to prove themselves.

Batting position apart, what was very creditable on Kohli’s part was the faith he put in Bumrah in both eliminators. The Gujarat lad is the most valuable bowler in India at this point in time. He is the fulcrum around which the Indian bowling attack revolves. Kohli could have asked Shami and Thakur to do the honours in the super overs at Hamilton and Wellington.

Both had their rhythm very finely tuned when they bowled the 20th overs in the matches and no one would have questioned Kohli’s decision had he done so. Kohli’s act of asking Bumrah to bowl in the super overs just shows he does not want his spearhead to lose his confidence. Kohli knows Bumrah is his best bet if he has to continue India’s wining streak in the three ODIs to follow and in the important two-Test series which is crucial for India in the World Test Championship.

Giving all selected team members a chance was rare of in Indian cricket. There have been many tours in the past where team members were divided into players and tourists. The current Indian team management, led by Kohli and team coach Ravi Shastri, are giving opportunities to players sitting on the benches to compete with those that are regulars in the playing eleven and making them feel a part of the team.

They have given many opportunities to young Rishab Pant and are picking players like Washington Sunder and Sanju Samson in the playing eleven to prove themselves in the field of play. Kohli and Shastri would have had no opposition had they continued playing with a full side in the last two T20s against New Zealand after having won the T20 series.

Investing in people is what makes great leaders and drives teams to be successful across all genres. By resting in-form players like Rohit Sharma, Ravindra Jadeja and Shami and allowing Sunder, Samson and Navjot Saini to play the fourth T20, they have shown their willingness to create assets.

Backing talent and creating resources at the cost of going for glory — Kohli could have continued the same eleven for a 5-0 brownwash — will hold Kohli and Shastri in good stead. I do believe the duo, and the selectors, have realised the value these assets will provide in the future.