India and Australia are the two most successful teams in the history of the tournament having won the coveted trophy thrice each. 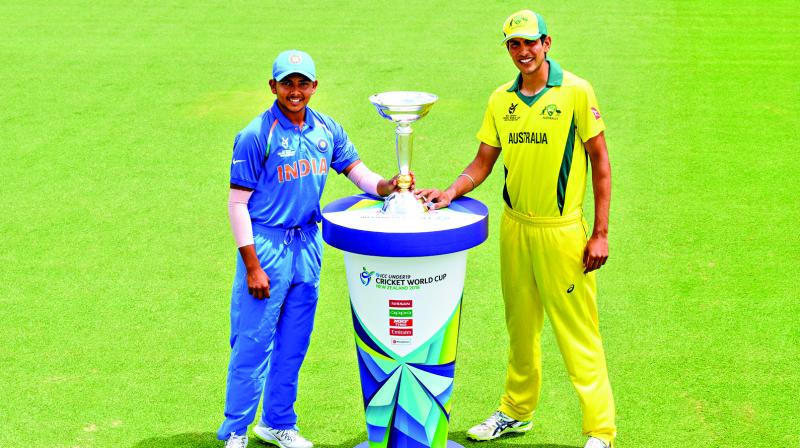 Prithvi Shaw of India (left) and Jason Sangha of Australia with the ICC U-19 World Cup trophy. (Photo: ICC)

Mount Maunganui (New Zealand): Unstoppable so far, India would be aiming to rewrite record books with a fourth title when the Rahul Dravid-coached side squares off against an equally formidable Australia in the final of the ICC Under-19 World Cup, here on Saturday.

India and Australia are the two most successful teams in the history of the tournament having won the coveted trophy thrice each.

But come Saturday, Dravid’s sprightly boys will be desperate to outwit their Australian counterparts and become the first team in the history of the event to lift the trophy for a record fourth time.

The promising Prithvi Shaw, already being seen as the next big thing in Indian cricket, will be eager to join the likes of Mohammad Kaif (2002), Virat Kohli (2008) and Unmukt Chand (2012) in leading the side to the U-19 World Cup title.

Going by current form, odds are heavily in favour of India. The Indians have put in some impressive performances to win all their five matches, including an emphatic 203-run win over arch-rivals Pakistan in the semi-final and a 100-run victory over Australia in their tournament-opener.

The massive win over Pakistan in the semifinal will do a world of good to India’s confidence. After putting a total of 272 on the board, they dismissed the opposition for a paltry 69.

So far, it has been collective performance from Dravid’s boys as every member of the squad has contributed to the team's success in one or the other way.

India’s batting has been at its lethal best. While the openers — Shaw and Manjot Kalra — have given the team good starts throughout the tournament, Shubman Gill has been in phenomenal form at the number three position.

In fact, all eyes will be on Gill, who has been the most consistent batsman of the tournament. He scored a scintillating unbeaten century against Pakistan in the semis and would be eager to script one more impactful knock. In the bowling department, Shivam Mavi and Kamlesh

Nagarkoti have been phenomenal, raking up speeds in excess of 140kmph at their will. But they will have their work cut out against a strong Australian batting line-up. Abhishek Sharma is another important player in the squad to look up to.