Burns joined Archer on the sidelines after injuring his left ankle warming up before Thursday’s practice in a kickabout with a football. 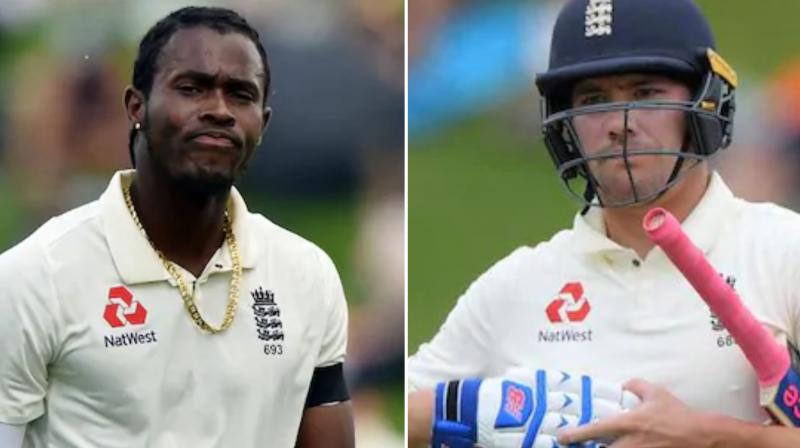 England faced a double injury blow ahead of the second test against South Africa as Rory Burns and Jofra Archer were declared doubtful for Friday’s start at Newlands. (Photo:AFP/Twitter)

CAPE TOWN: England faced a double injury blow ahead of the second test against South Africa as Rory Burns and Jofra Archer were declared doubtful for Friday’s start at Newlands.

Burns joined Archer on the sidelines after injuring his left ankle warming up before Thursday’s practice in a kickabout with a football.

Archer, who burst on the scene at last year’s World Cup, pulled up with the injury in practice on Wednesday. Both were awaiting the results of scans on Thursday before any decision on their participation was made, the England and Wales Cricket Board said.

Burns, 29, is the latest in a growing tale of woe for the tourists since arriving in South Africa on Dec. 14.

First a flu virus swept through the squad, with 10 players going down at one stage or another immediately after the team’s arrival through to the end of the first test in Pretoria, which England lost by 107 runs on Sunday.

Burns’ misfortune comes after Archer pulled out of bowling practice on Wednesday despite earlier batting and fielding with the rest of the team .

“It was quite disappointing to see him pull up like that and now we’ll just have to make another late call,” captain Joe Root said of Archer’s injury on Thursday.

“It’s been frustrating throughout, but these things happen in sport and you got to manage them as best you can and we are trying to do everything we can to make sure that if anyone does pick up illness or injury, others are fit and ready to go.”

Root conceded that potentially losing Archer would be a major blow to England, seeking to get themselves back into the series at a venue where South Africa have rarely lost.

“If you look at his short career, he’s made impacts with big moments in big test matches so, of course, it will be a big loss if he is not fit to play but it creates another opportunity for someone else,” Root said.

But England were still some way off a final selection, Root added.

“Everything is still on the table as it stands. We’ll make a decision on the surface when we’ve had a closer look at it, maybe even tomorrow morning,” he said.