As practice maketh a man perfect, so are the hardships that bring sheen and glory to the lives of people who never give up. 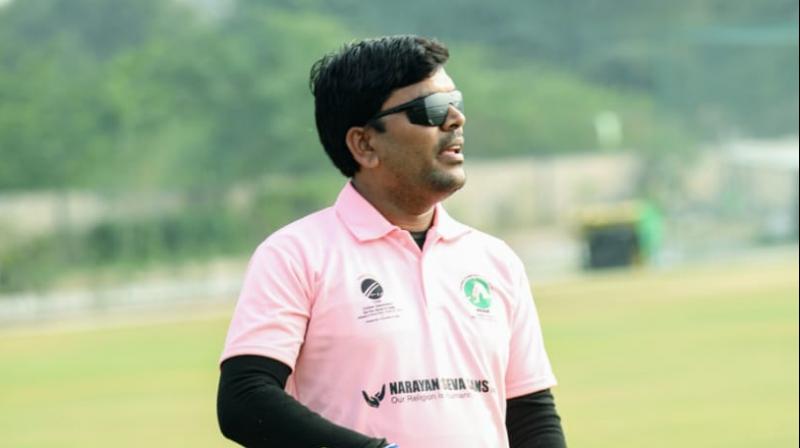 A ray of hope is a ray of light for many, but not for those who have marked to strive in a journey of darkness. This is an inspiring story of Sonu Golkar, Captain of the Blind Cricket Team of Madhya Pradesh.

As practice maketh a man perfect, so are the hardships that bring sheen and glory to the lives of people who never give up. Sonu Golkar is one of them, who has chosen a path less travelled and has not only overcome complete blindness but has proven to be a Captain who has represented his team at a state level as well.

Born to a middle-class family on 5th February 1986 in Bhopal, Sonu was born with a normal vision in his eyes. A bright boy with dreams like any other child in his eyes, Sonu had always dreamt of becoming a world-renowned cricketer. However, things began to change when he was 10 years old.

Sonu began to complain about distorted vision in his right eye, which was later on diagnosed as Cataract. He was soon operated by the doctors at District Eye Hospital in Khandwa where the operation failed miserably due to retinal detachment. Things began to worsen as he lost sight in the right eye completely and soon affected his left eye where Sonu was declared completely blind.

Sonu was sympathized and was always greeted with empathy and pity by people close to him which made him feel a bit dejected and demotivated. His experience has been an eye-opener from being a normal child to a visually impaired person. Not budging and having the zeal to do more with his life, Sonu never wanted to lose hope. He enrolled himself in the Helen Keller Education Academy, a blind School, Indore and learned the Braille script which enabled him to read and write. His grit and determination never bogged him down and led him to achieve his best academically.

A bright student, Sonu made rapid progress in class 10th. Today Sonu has completed his Master’s in Sociology from Khandwa College and has worked with numerous social organizations where he made a huge difference with his work. Sonu had also considered studying Law but left it midway during the second semester.

With all the societal discrimination faced as a blind individual, Sonu had always gathered his motivation from the school he had enrolled in. Reminiscing the challenges he faced playing cricket in the Helen Keller Education Academy for the blind, Sonu says that the entire journey was both overwhelming and exciting. He changed the way he experienced things and mentally prepared himself to be a fighter in his way.

A cricket lover at heart, his journey has seen many quits and gains. His inspiration was World Cup Matches that he heard on the Radio and Television that thoroughly inspired him. In the year 2003, Sonu played for the state, he even moved to Delhi, but things did not work which made him eventually give up on the game.

A go-getter, Sonu just did not want to give up on his dream where the T20 World Cup prompted him to return to the game he loved. An amazing turning point in Sonu’s life was when he was working for an organization in Bangalore named Leonard Cheshire Disability (LCD). He resigned from his job and returned to Khandwa, Madhya Pradesh where he formed a cricket association for the blind. Sonu is the founder secretary of MP Blind Cricket. He played many tournaments and chose to organize various local tournaments. His game was recognized in 2015 when he was selected for England tour which was then a turning point in his life.

Sonu recalls his first match at the Oval, only the first ball was hit to the boundary. He scored 22 runs in 20 balls in the match. From there, he never looked back. He played at the Asia Cup, T20 World Cup, and World Cup 2018. He has been associated with Samarthanam since his move back to Khandwa in 2013.

Sonu pursued his journey to be a cricketer and today he is a B1 category player in the 'Indian Blind Cricket Team' and 'Madhya Pradesh Blind Cricket Team'. Sonu presently works at the Indian Overseas Bank (IOB) as an Assistant Manager.

Talking about the four-day "International Blind Cricket Championship 2019" organized by Narayan Seva Sansthan, Sonu says, “I am grateful to be a part of this tournament and the Narayan Divyang Sports Academy. Such efforts will always motivate people with great passion and zeal with physical inabilities to pursue their dreams and keep moving forward”

Narayan Seva Sansthan, President, Mr Prashant Agarwal says, “We believe in the ability of every single soul who is a part of this world. Giving equal opportunities with no discriminations is the prime objective of Narayan Seva Sansthan. Acknowledging the contributions made by these visually impaired individuals who have been our nation’s pride and have won the Blind Cricket World Cup, T20 Blind Cricket World Cups, we have set up a fully equipped ‘Narayan Divyang Sports Academy’ in Udaipur, Rajasthan.”

The facilities offered at ‘Narayan Divyang Sports Academy’ are free of cost where the players from all communities and regions of India can come forward and fulfil their dreams. Mr Prashant Agarwal says, “We would like our team to aim the stars and reach the Olympics.”