The rock-solid No.3 was unconquered on 73 with Steve Smith on 42 as Australia reached tea at 182 for two. 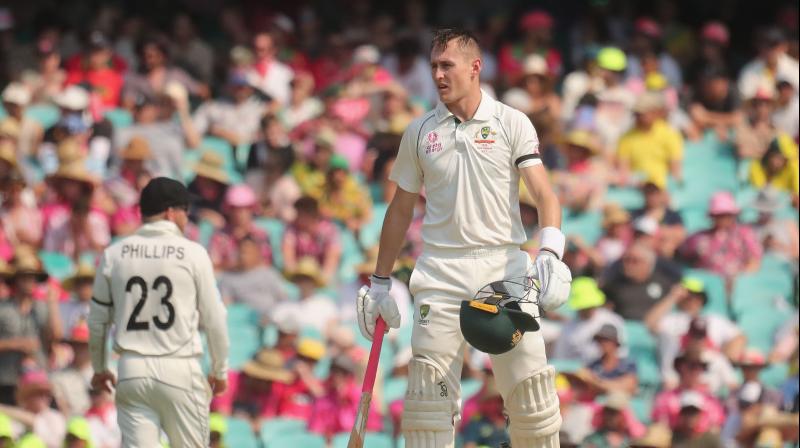 Marnus Labuschagne hit his sixth half-century in seven innings to guide Australia into a powerful position against virus-hit New Zealand on the opening day of the third Test in Sydney on Friday. (Photo:AFP)

Sydney: Marnus Labuschagne hit his sixth half-century in seven innings to guide Australia into a powerful position against virus-hit New Zealand on the opening day of the third Test in Sydney on Friday.

The rock-solid No.3 was unconquered on 73 with Steve Smith on 42 as Australia reached tea at 182 for two.

It was Labuschagne's eighth half-century in 14 Tests as he closed in on his fourth hundred of the home Test summer.

Smith, who took 39 balls to get off the mark, shared in an unbroken 87-run stand with Labuschagne after the loss of David Warner just after lunch.

Warner fell again to the leg-side trap on the third ball after the interval when he was caught by Colin de Grandhomme at leg gully off his nemesis Neil Wagner for 45.

It was the fourth time in the series left-armer Wagner has snared Warner, who has yet to reach a half-century against New Zealand this summer after scoring an unbeaten 335 and 154 against Pakistan last November.

Opener Joe Burns fell in the 15th over, squared up by de Grandhomme and caught by Ross Taylor at first slip for 18.

De Grandhomme opened the bowling with Matt Henry after senior paceman Tim Southee was surprisingly left out of the attack.

Australia won the toss and chose to bat against the visitors, who made five changes to the team that lost the Boxing Day Test in Melbourne by 247 runs.

The Black Caps went into the Sydney Test without skipper and star batsman Kane Williamson, who has been ill in the lead-up.

Batsman Henry Nicholls and spinner Mitchell Santner were other illness withdrawals while Southee lost his place to leg-spinner Todd Astle.

Paceman Trent Boult is also missing after returning home with a broken hand suffered in the second Test in Melbourne.

Batsman Glenn Phillips, who made a late dash to Sydney as cover on Thursday, was named to make his Test debut, with opener Tom Latham to lead the side in Williamson's absence.

Will Somerville, Matt Henry and Jeet Raval were also called into the side, while the Australians were unchanged after considering Mitchell Swepson as a second spinner.

Australia have been unbeatable this season, winning all four Tests at home -- two each against Pakistan and New Zealand -- after retaining the Ashes in England.

The Test is being played against the backdrop of one of Australia's most devastating bushfire seasons with at least 18 people losing their lives in blazes raging across the country, including on the outskirts of Sydney.

Play will be suspended in the match at the umpire's discretion, should smoke significantly affect air quality or visibility, but the sky above the ground was clear during the first two sessions of play.