This is the first time ever a bowler has taken six wickets for no run in any international match. 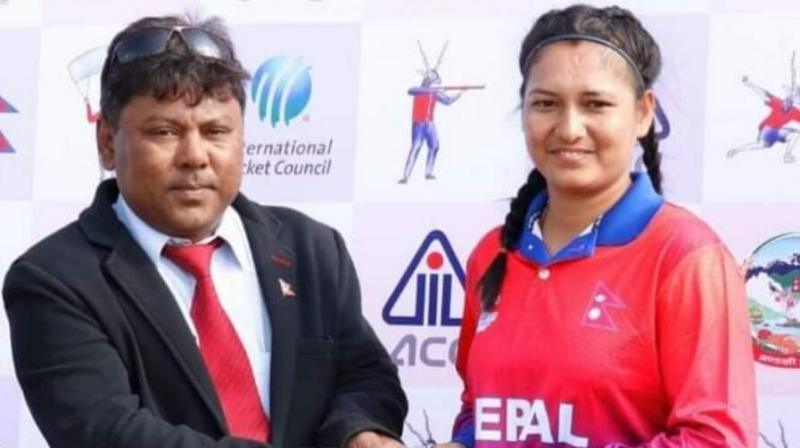 The 24-year-old Anjali Chanda dismissed six batswomen - all for nought - in 2.1 overs as Nepal bowled out Maldives, who elected to bat, for just 16 runs from 10.1 overs. (Photo: Twitter/ Nepal Cricket)

Pokhara: Nepal's Anjali Chanda on Monday scripted history by producing the best bowling performance in a women's T20 Internationals with figures of 6/0 in a match against Maldives at the 13th South Asian Games here.

This is the first time ever a bowler has taken six wickets for no run in any international match.

Earlier, the record belonged to Malaysian Mas Elysa, who had claimed six wickets for three runs from her 4 overs against China women in January this year.

The 24-year-old Anjali dismissed six batswomen -- all for nought -- in 2.1 overs as Nepal bowled out Maldives, who elected to bat, for just 16 runs from 10.1 overs.

Eight Maldives batters got out without opening their account, while two made single-digit scores.

In reply, Nepal chased down the target in just five deliveries, reaching 17 for no loss.

Opener Kajal Shrestha remained not out on 13 while there were four extras (2 wide, 1 leg bye and 1 no ball).

The run chase lasted just seven deliveries, of which five were legal.

"Nepal's victory in 5 balls, however, is not the quickest victory as Rwanda and Tanzania had defeated Mali in 4 balls in July 2019."