The skipper, Pandey, played an unbeaten knock of 60 runs off just 45 balls to help Karnataka post a respectable total of 180 runs. 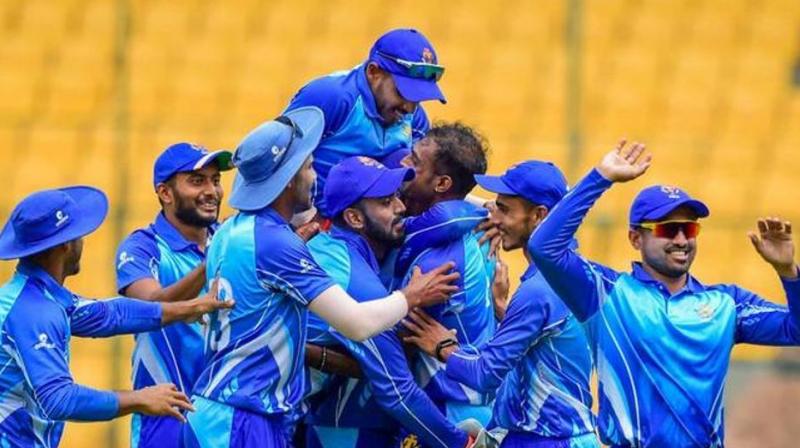 Chasing a target of 181 runs, Tamil Nadu's Hari Nishanth started playing aggressively and smashed three boundaries to Ronit More. However, More made a comeback in the same over and dismissed Nishanth (14).

Shreyas Gopal then took the wicket of the other opener, Shahrukh Khan (16).

Dinesh Karthik and Washington Sundar were the next batsmen but the former only managed to score 20 runs before he was sent back to the pavilion.

Krishnappa Gowtham then bowled Sundar (24) to reduce Tamil Nadu on 80/4 after the completion of 10 overs.

Aparajith's dismissal brought Ravichandran Ashwin on the field and they needed 13 runs from the last over. Ravichandran smashed two boundaries off the first two deliveries of the over, bowled by Gowtham.

However, as the winning was inclining towards Tamil Nadu, Shankar (44) got runout and Gowtham managed to restrict them to 179 runs.

Earlier, after being asked to bat first, Karnataka had a decent start but Ravichandran Ashwin came out furiously in the fifth over and clinched two wickets. First, he sent KL Rahul (22) back to the pavilion and then caught and bowled Mayank Agarwal.

Devdutt Padikkal and Manish Pandey then took the charge and provided Karnataka with some momentum. In the 10th over, Washington Sundar bowled Padikkal to end his 32-run innings.

Rohan Kadam was the next batsman to join Pandey, who went on to complete his half-century. Kadam played a knock of 35 runs before Murugan Ashwin dismissed him.

The skipper, Pandey, played an unbeaten knock of 60 runs off just 45 balls to help Karnataka post a respectable total of 180 runs on the board.