Australia complete Pakistan whitewash, win by an innings and 48 runs

The 32-year-old Lyon (5-69) now has 50 test wickets at the Adelaide Oval, where he'd worked as a curator before making the national team. 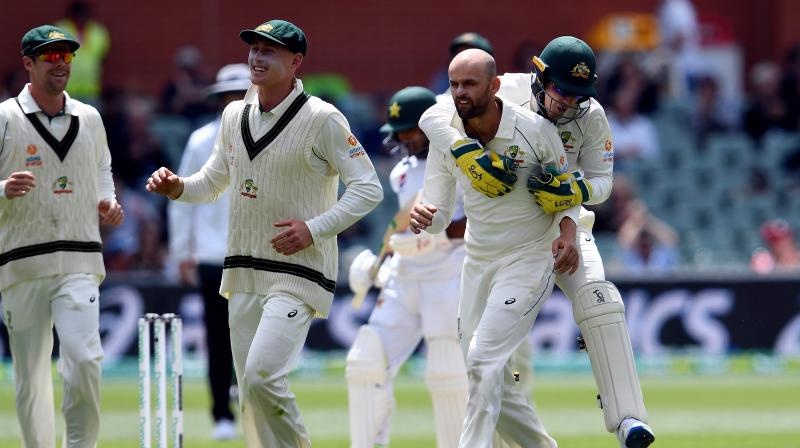 Nathan Lyon took two wickets in the first session Monday and three in the second before Australia finished off a victory by an innings and 48 runs under lights to complete a two-test series sweep with more than a day to spare. (Photo: AFP)

Adelaide: Nathan Lyon had never taken a five-wicket haul against Pakistan. The veteran off-spinner hadn't taken a wicket in the day-night test until the fourth day.

Then they tumbled. He took two wickets in the first session Monday and three in the second before Australia finished off a victory by an innings and 48 runs under lights to complete a two-test series sweep with more than a day to spare.

The 32-year-old Lyon (5-69) now has 50 test wickets at the Adelaide Oval, where he'd worked as a curator before making the national team, his 16th five-wicket haul in tests and his first against Pakistan.

The pace trio of Mitchell Starc, Pat Cummins and Josh Hazlewood did most of the damage in the first test, which Australia won by an innings and five runs, and in Pakistan's first innings in Adelaide before the follow-on.

Pakistan resumed at 39-3 on day four and took the total to 123 before Lyon came into his own on familiar turf. Hazlewood picked up the penultimate wicket soon after the dinner break and Cummins finished off the match when he threw down the stumps at the non-striker's end to run out Mohammad Abbas.

Opener David Warner's triple century set Australia on course for another big win, following up from his 154 in the first test. Marnus Labuschagne also produced back-to-back centuries as the Australian batsmen dominated an inexperienced Pakistan attack.

Lyon dismissed Shaheen Afridi to complete a five-wicket haul with the last delivery before the main interval Monday as Pakistan slumped to 229-8. Pakistan added only 10 further runs after the break.

Pakistan was 39-3 overnight after being forced to follow-on on day three when the visitors were bowled out for 302 to surrender a 287-run first-innings lead.

Shan Masood scored 68 in a determined, 127-ball stand that ended when he advanced to Lyon and misjudged a drive to mid-off, where Starc took a simple catch to end a 103-run fourth-wicket stand and make the score 123-4.

Asad Shafiq grafted his way to 57 from 112 balls before he was caught at leg-slip by Warner, trying to work a Lyon delivery square, as Pakistan slipped to 154-5.

Pakistan has been on the back foot since Australia won the toss and batted at Adelaide, with Warner posting an unbeaten 335 before skipper Tim Paine declared with the total at 589-3.

The dominance continued after the first break, with Lyon taking over from the quicks as the main threat. He bowled with subtle variety and just missing edges while getting regular wickets and conceding few runs with the old ball.

The sixth-wicket pair offered some stubborn defence before Lyon had Iftikhar Ahmed (27) caught by Labuschagne at short leg.

He trapped Yasir Shah (13) lbw in front with a ball that skidded and sped on for 13 and went to the dinner break midway through his 25th over when Shaheen was caught at mid-off by Hazlewood.

Pakistan will return home to host its first test series in a decade on home soil, against Sri Lanka, and Australia will take on New Zealand in a three-test series.