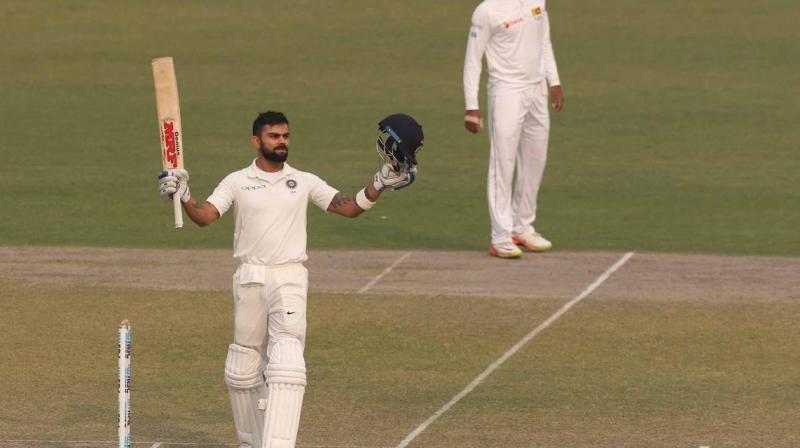 New Delhi: What a day of entertaining cricket this has been! Though Sri Lanka have ended Day 1 of the 1st Test at the Feroz Shah Kotla with a couple of wickets, they have been floored by the Indian batsmen. 150s from Virat Kohli and Murali Vijay have put the hosts in a commanding position and the troubles continue for Dinesh Chandimal’s men. The bowling attack seemed toothless and it will take something special on Day 2 if they are to keep the opposition batsmen at bay. Can India skipper Kohli reach back to back double hundreds tomorrow? We shall see. Thanks for joining us, see you tomorrow!

Sri Lanka started the 3rd Test against India on a good note, by wrapping up a couple of wickets before lunch at the Feroz Shah Kotla Stadium in New Delhi, but the hosts have grown in confidence despite an early shock. Murali Vijay and Virat Kohi then boosted the innings with a 281-run partnership, notching their individual 150s, before Sandakan dismissed the opener with a stumping. Sandakan followed it up by dismissing Ajinkya Rahane.

Kohli and Rohit Sharma will now aim to take India to a respectable score before the end of day's play. The visitors have possessed no threat whatsoever and will aim to change the script post lunch.

WICKET! Another one gone and it's the Ajinkya Rahane who has to depart. Another stumping round the wicket and it's due to another beauty from Sandakan. The Sri Lankan tosses up the googly wide outside off and Rahane falls for it, before Dickwella whips off the bails in a flash. Rohit Sharma walks in.

WICKET! A stunning innings from Vijay comes to an end after he falls prey to a wrong one from round the wicket off the bowling of Sandakan. Vijay reaches out for the shot, but lazily drags his leg and fails to get any part of his foot behind it. Sign of a batsman who has been tired, but nonetheless, a top innings!

Double 150! Complete dominance from India as Murali Vijay and Virat Kohli reach their 150s. The Sri Lankan bowling have looked toothless and the have looked out of the game. Will need to pull up their socks and get a few wickets before stumps.

Murali Vijay and Virat Kohli continue to score runs at ease as Sri Lankan bowlers fail to get breakthrough.

Murali Vijay has got to his 11th Test ton, as India march on.

The Indian domination continues, as the duo of Virat Kohli and Murali Vijay have taken them past 200. When will the Lankans find a breakthrough?

FIFTY! It is fifty number 15 for Virat Kohli as he continues his successful run in 2017. Can he score another century?

Yet another milestone for captain Kohli as he has surpassed 5000 Test runs.

New Delhi: India posted a total of 116-2 at lunch break on day one of the third Test against Sri Lanka here on Saturday. India won the toss and elected to bat first.

Shikhar Dhawan and Murali Vijay started the innings on a confident note, but the former faltered as he was dismissed for 23.

Pujara, who scored a century in the second Test, had a short stay in the middle as he, too was dismissed for 23. Post this, Murali Vijay got to his 16th Test fifty, as he looked to build a strong partnership with Virat Kohli, batting on 17.

For Sri Lanka, Dilruwan Perera got his 100th Test wicket by dismissing Dhawan, while Lahiru Gamage got the wicket of Pujara.

WICKET! Shikhar Dhawan has departed for 23, as Dilruwan Perera gets his 100th Test wicket. A huge breakthrough for the visitors.

India have won the toss, and will bat first.

New Delhi: Virat Kohli-led India will hope to clinch a record-equalling series when they take on Dinesh Chandimal’s Sri Lanka in the third and final Test here at the Feroz Shah Kotla on Saturday. After having draw the rain-marred first Test in Kolkata, the hosts bounced back strongly to defeat the Islanders by an innings and 239 runs in the second Test.

A win or a draw in the third Test will see them equal Australia’s record of nine consecutive series wins, a record which was held between 2005 and 2008.

For the hosts, the top-order batting will be a puzzle, and it will be interesting as to who among Shikhar Dhawan,m KL Rahul and Murali Vijay will make the cut.

Shikhar Dhawan opted out of the previous match in Nagpur citing personal reasons, and is back for the Test at his home ground.

Mohammed Shami could return back to the team, and if he does, he could replace Umesh Yadav, as Ishant Sharma would also keep his place in the playing XI.

Post this Test, captain Virat Kohli will get a much-needed break from cricket, as it will be Rohit Sharma who will lead in the upcoming ODI series against the same opponents.

For the visitors, Rangane Herath will miss out after suffering a back injury. However, it remains to be seen if his replacement Jeffrey Vandersay will make the cut yto the playing XI. The main focus for the Lankans will be in the top order, especially Sadeera Samarawickrama, who has not had a successful tour so far.

If the batting fails, it will be upto Angelo Mathews and Dinesh Chandimal to take the visitors forward, as they have had a decent run.