Rohit expressed happiness that the young generation is providing India with a lot of options. 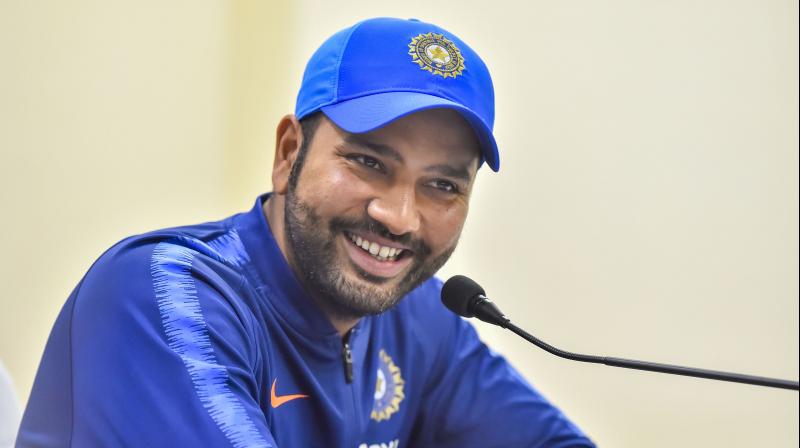 Rohit Sharma said one of the two players could be seen in the playing XI and the way he backed young wicket-keeper, Rishabh Pant, it was clear that most likely it will shivam Dube who will get his India cap. (Photo: PTI)

New Delhi: India's stand-in captain Rohit Sharma on Saturday indicated that Mumbai all-rounder Shivam Dube could be handed his international debut when the hosts clash with Bangladesh in the opening Twenty20 here.

While the skipper spoke highly of young Dube and Sanju Samson, he acknowledged the Kerala wicket-keeper's experience.

Rohit said one of the two players could be seen in the playing XI and the way he backed young wicket-keeper, Rishabh Pant, it was clear that most likely it will Dube who will get his India cap.

"We will assess now and probably a bit before the game as well. But both (Sanju and Dube) are definitely in the fray. One of them might definitely play. You might see in playing XI. All doors are open to everyone. Anyone might come into the playing XI any moment," said Rohit at the pre-match press conference.

Rohit, leading the side in the absence of Virat Kohli who has been rested, backed local boy Pant, an indication that Samson may not figure in the XI.

"We have to back him (Rishabh). He has only played 15-20 T20s. It's too soon to judge him. There's still a lot of time left before passing judgement on Rishabh," he said.

Rohit expressed happiness that the young generation is providing India with a lot of options.

"Sanju is one of them. He has been performing quite well in the domestic circuit and IPL, and Shivam is somebody who has come into the ranks last year. He is somebody who has made his mark just before last year's IPL auction which is why people were so keen to buy him."

"There are a lot of new guys in the squad. They have not played a lot of T20 for India and we have to give them opportunities and see what we have before we go for that World Cup in Australia."

The captain said the conditions will dictate the combination.

"A lot has got to do with how the pitch is going to play. If the pitch is slow, slow bowlers come into the play a lot. If it means we have to play three spinners then we will play three spinners. And if there is grass and we feel there will be some bounce, then we might play with three seamers as well. So everything depends on the conditions," he said.