'Bangladesh will welcome back Shakib despite mistake': Mahmudullah Riyad 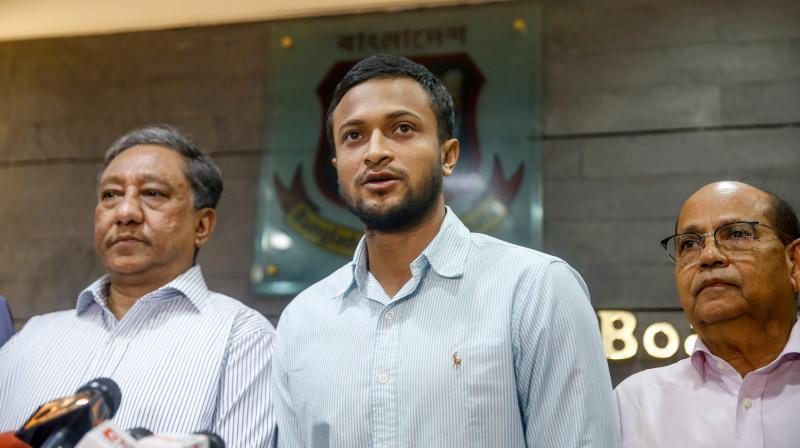 Mahmudullah Riyad said they will miss Shakib al Hasan but it was also an opportunity for others to step up and fill that void. (Photo: AFP)

New Delhi: Shakib Al Hasan remains just as popular among his Bangladesh teammates despite his anti-corruption breach and will be welcomed back with open arms when his ban expires, the national team’s Twenty20 captain Mahmudullah said on Saturday.

Bangladesh cricket suffered a jolt on Tuesday when the game’s governing body banned Shakib for two years, with one year of that suspended, for failing to report corrupt approaches.

It forced a last-minute leadership change ahead of their tour of India with Mominul Haque named as the test captain, while Mahmudullah was put in charge of the Twenty20 team.

“We love him as much as we did before this incident,” Mahmudullah told reporters ahead of Sunday’s series opener against India.

“The bonding with him is such that when he returns to the side, we’d welcome him with open arms and give him a hug.”

“He’s been a key player for us. Despite what happened, we still support him. Probably he made a mistake but he did not commit any crime.”

Mahmudullah said they will miss Shakib but it was also an opportunity for others to step up and fill that void.

“Shakib has been performing for 10-12 years in international cricket, So it’s not easy to replace him. But I consider it an opportunity for everyone else, including me as the captain.

“Combination wise, his absence affects team balance because you don’t have another all-rounder like Shakib.”

The tourists are also without senior opener Tamim Iqbal, who has opted out to be with his pregnant wife, but the absence of Shakib, arguably the greatest player Bangladesh has produced, would be felt the most.

Mahmudullah will draw on his decade-plus experience of sharing the dressing room with Shakib and one-day captain Mashrafe Mortaza as he hopes to impress as a skipper.

“We’ve played the last 10-12 years together. Shakib has some amazing qualities, and Mash is a great motivator. I just need to be a good leader and step up my game.”

Authorities in New Delhi declared a public health emergency on Friday and closed schools and all construction activity until next week as air pollution in the city hit its worst level this year.

Bangladesh cricketers wore face masks in training and complained of sore throats but Mahmudullah said they were not too perturbed.

“We had a chat about this. It’s not in our control, so we’re focusing more on the game tomorrow, to play well and win the game.”