The classy Rohit laid the foundation with a 45-ball 70, lacing his innings with eight fours and three sixes. 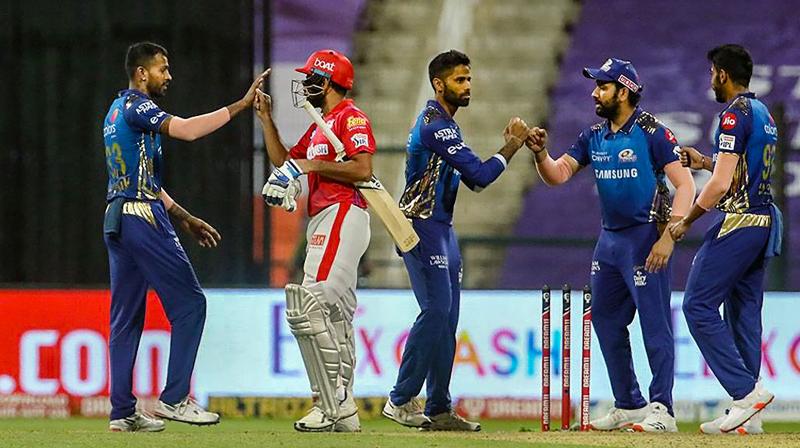 The duo of Kieron Pollard and Hardik Pandya smashed fours and sixes at will, scoring 67 runs in 23 balls to lift MI to 191 for four from 83 for three in the 14th over. (Photo | PTI)

Rohit Sharma's elegance mingled with the belligerence of his two six-hitting lieutenants as Mumbai Indians (MI) humbled Kings XI Punjab (KXIP) by 48 runs in an IPL match here on Thursday.

Invited to bat, the classy Rohit laid the foundation with a 45-ball 70, lacing his innings with eight fours and three sixes.

Then, the duo of Kieron Pollard and Hardik Pandya smashed fours and sixes at will, scoring 67 runs in 23 balls to lift MI to 191 for four from 83 for three in the 14th over.

Chasing a stiff target of 192, Kings XI Punjab were stopped at 143 for eight, with Nicholas Pooran making 44 off 27 balls.

Earlier, Pollard walked out unbeaten on a 20-ball 47, while Hardik remained not out on 30 off 11 balls, the two hitting six sixes and as many fours between them.

MI got 25 runs in the final over with Pollard sending Krishnappa Gowtham's last three balls into the stands of the Sheikh Zayed Stadium, scored 19 off the penultimate over and 18 in the 18th.

A total of 104 runs came in the last 36 balls despite one excellent over in between by Mohammed Shami.

MI were 87 for three at the end of the 14th over but upped the ante with Pollard and Rohit hitting a six each off leg-spinner Ravi Bishnoi to collect 15 runs from the 15th over.

Rohit scored 22 runs off the 16th over bowled by James Neesham.

It was then left to the pair of Pollard and Hardik to launch a brutal onslaught.

The start was inauspicious for the defending champions as Sheldon Cottrell castled Quinton de Kock with late swing.

Smashed for five sixes in an over in his previous outing, it was a new day, a new game for Cottrell, as he started with a wicket maiden.

Rohit reached 5000 IPL runs with a glorious cover drive off his first ball of the innings, joining Virat Kohli and Suresh Raina in the club.

Three balls later, Rohit punched one along the ground through the cover-point region for another boundary.

Shami came back to hit the pads and forced the umpire to raise his finger with a vociferous appeal. However, the decision was turned down after a review as the ball seemed to be going down the leg-stump.

Leg-spinner Ravi Bishnoi was introduced into the attack in the fourth over and while Shami could not strike with the ball first up, the India pacer ran out Suryakumar Yadav with a direct hit from short fine leg to leave MI at 21 for two in the fourth over.

Rohit gave himself some room and played Gowtham between mid-off and extra cover and cut the next ball through the point region for another fine boundary.

Having reached 14 off 21 balls, Ishan Kishan lofted Bishnoi for a massive six over deep mid-wicket to break the shackles.

Kishan soon got out to pave the way for Pollard's entry.

In reply, KXIP lost wickets at regular intervals to lose their second match on the trot. They were never in the game after losing the wickets of the in-form opening duo of skipper KL Rahul and Mayank Agarwal, even though Pooran played a few handsome shots.

For Mumbai Indians, there were two wickets apiece for James Pattinson, Rahul Chahar and Jasprit Bumrah.