Smith made his comeback to Test cricket on Thursday after serving a year-long ban for his involvement in last year's ball-tampering scandal. 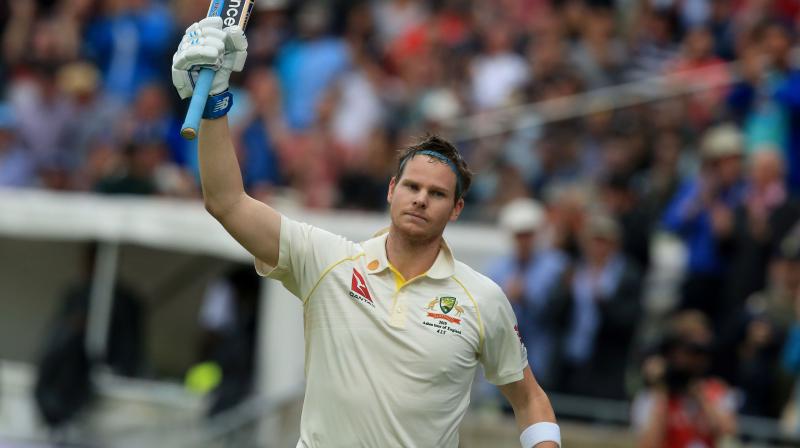 Ponting compared Smith's unbeaten 141-run inning that he played during the 2017-18 Ashes in Brisbane. (Photo: AFP)

Melbourne: Former Australia skipper Ricky Ponting praised Steve Smith for being mentally strong as he overcame all the boos and jeering during the first Ashes match and smashed a brilliant ton.

Smith made his comeback to Test cricket on Thursday after serving a year-long ban for his involvement in last year's ball-tampering scandal. Smith played a knock of 144 runs to help his side finish the first inning on 284 runs.

"To be able to do that speaks volumes of him as a person. It just goes to show how strong he is mentally and how good a Test match player he is," Cricket.com.au quoted Ponting as saying.

Smith's crucial ton came when his side was reduced to 122 for 8 by the England bowlers. However, Smith's century helped his side post a respectable total.

Ponting compared Smith's unbeaten 141-run inning that he played during the 2017-18 Ashes in Brisbane.

"That hundred he got in Brisbane (in 2017) really set the tone for the whole series and it looks like he's done that again, when he's team needed it the most. Having been there a few times myself, when your back's against the wall and your team needs you, they're the innings that you become most proud of," he said.

Although the 30-year-old can play for his side, Smith is yet to serve another one-year ban which restricts him from being the captain of the team. However, Ponting feels that Smith is doing everything to lead the team.

Ponting even went on to say that if Smith continues to play the way he is doing now, he will be remembered as 'one of the all-time greats'.

"A lot of things he does are very different, with the way he trains and the way he plays. But whatever he's doing is working. He's playing a different game than most blokes at the moment. If he keeps trending the way he is, he'll be remembered as one of the all-time greats that the game has ever seen. He's going to leave a lot of us old blokes behind, that's for sure," Ponting said.

Smith was booed and jeered in the World Cup by the English supporters and that trend continued in the Ashes as well. Despite Smith's scintillating inning, Ponting is of the opinion that the booing is not going to go away, rather it might get worse.

"(The booing is) not going to go away, that's one thing we know. It might even go the other way; if (Smith) plays like that again, the booing might even get worse just to get inside his head even more," he said.

The second day of the Test match will continue from England's inning.