Virat Kohli, however, was quick to point out that both Mukund and Dhawan have backing from the team. 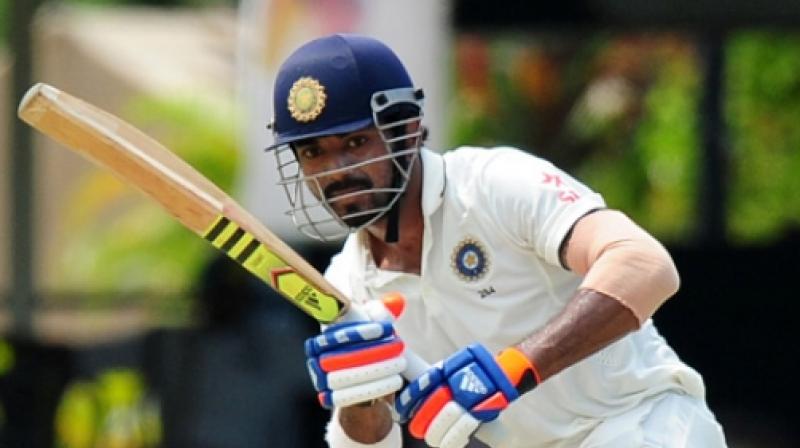 In the previous Test series that he played against Australia, KL Rahul notched up 393 runs with six half-centuries in four Tests. Even in the warm-up game in Colombo against Sri Lanka Board President's XI, Rahul scored 59 runs.(Photo: AFP)

Colombo: Fit-again opener KL Rahul is all set to make a comeback to the Indian team for the second Test against Sri Lanka starting tomorrow, skipper Virat Kohli announced on Wednesday.

Rahul was out of the first Test due to viral fever and needed hospitalisation for a couple of days. Shikhar Dhawan used the opportunity to hit a match-winning 190 in the first innings while Abhinav Mukund hit a career-best 81 in the second innings.

In all likelihood, it will be Abhinav Mukund, who will have to sit out.

"KL Rahul has been our established opener. I feel one of the openers (Dhawan or Mukund) will have to make way for him because what he (Rahul) has done in the past two years for us has been very solid. He deserves to come back and start fresh in Test cricket again," Kohli said at the pre-match media conference.

"We have a team meeting later on after practice and we'll be able to clarify that then. But yes, according to me, KL (Rahul) will definitely come back into the eleven," confirmed the skipper.

In the previous Test series that he played against Australia, Rahul notched up 393 runs with six half-centuries in four Tests. Even in the warm-up game in Colombo against Sri Lanka Board President's XI, Rahul scored 59 runs.

"It won't be changed because of unfortunate events that happen outside of the playing field or the injuries that you can't control," Kohli reasoned.

Kohli is confident that Rahul will come out stronger. "That phase you have to come back, you need to get stronger. He has really stuck it out in that phase. It's been hard for him, we all know that, because he was batting so well and then he was out because of this.

"It is very important to make him feel secure and he deserves it because he has given us those big performances when the team has required the most. He is a guy that needs to be backed and we as a team, as management and me as captain all back him 100 per cent," he added.

Asked about who among Dhawan or Mukund will be axed from the playing XI, his answer indicated that it will be the Tamil Nadu left-hander, who in all likelihood, will warm the benches.

"I feel in a situation like this, you need to sit down and think which player has had more impact on the game. Who has been able to sort of make that difference in the game straightaway? It all depends on who has had a better game, to be honest," said Kohli.

Dhawan's scored 190 off 168 balls that won him the man- of-the-match award in the first Test against Sri Lanka.

Kohli admitted that the margin in terms of quality between two international players is very little.

"It's a pretty thin line. It is a very small margin but unfortunately that is how the sport goes sometimes and things happen in a team environment. In the dynamics of a team, the guy who sits out will understand the reasons behind it," said the skipper.

However, Kohli was quick to point out that both Mukund and Dhawan have backing from the team.

"Not to say that those people are not being backed but it's whatever the best combination we as a team feel we should take on the field, we back that and we take that call. It is up to the individuals, who are involved in that decision to understand it is for the best interest of the team.

"Guys are professional enough to know that but I think in a scenario like this, you will always think of a guy, who has had more impact on setting up the game or winning the game for the team," he added.

Meanwhile, no other changes are expected for India, as the wicket laid out at the SSC is pretty hard with a fine sprinkling of green. It is not quite similar to the one in

2015, which was a proper green-top pitch and assisted pacers throughout the game.

"I had a look at the wicket on Tuesday, I haven't seen it on Wednesday yet. It looked pretty nice and hard underneath with good covering of grass. The last time around as well, we thought it was a great wicket for Test cricket," Kohli observed.

The Indian captain assessed it as a result-oriented wicket.

"It is a wicket that you will get a result for sure. That excites us, it's something that we look forward to as a team and this is the kind of wicket that we always like to play on,

where we have a chance to make an impact on the game throughout," said Kohli.

Kohli urged his batsmen to show more composure once there is a partnership going.

"One thing we need to be aware of is when there is a partnership or some thing happening, then we need to have more composure and more discipline at times. But as I said, there always will be a few scratches here and there when you are playing Test cricket after March,” he signed off.