ICC CWC'19: Key players to watch out for in South Africa Bangladesh match 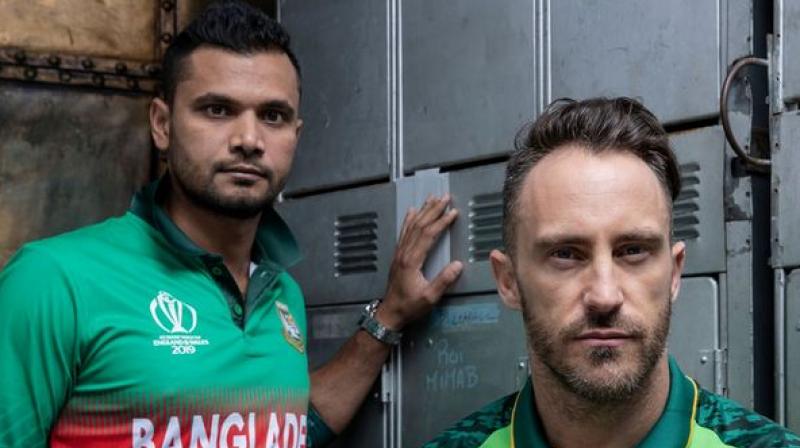 South Africa restricted England on 311/8 in their opening World Cup encounter, but the Proteas lost the match by 104 runs as the English bowlers rattled the middle-order of South Africa. (Photo: ICC/twitter)

London: After going down to the host England in their opening encounter, South Africa will lock horns with Bangladesh in the ICC Men's Cricket World Cup 2019 at the Kennington Oval in London, starting at 3:00 pm (IST) today.

Known as Proteas, South Africa are considered as chokers. The tag has not left them as the team has never gone past the semi-final stage in the World Cup. The Proteas reached semi-finals on four occasions - 1992, 1999, 2007 and 2015.

South Africa restricted England on 311/8 in their opening World Cup encounter, but the Proteas lost the match by 104 runs as the English bowlers rattled the middle-order of South Africa. The Faf du Plessis-led side would be aiming to win their second match to get their campaign back on track.

Bangladesh have improved in multi-nation tournaments. The team had qualified for the quarter-finals of the 2015 edition and finished as semi-finalists of the ICC Champions Trophy 2017.

Since the 2015 edition, Bangladesh have won 13 away matches - beating New Zealand twice and West Indies - to improve their record on paper. Bangladesh would be aiming to open their campaign with a win under their belt to boost their confidence in this six-week tournament.

Following are the players to watch out for in Proteas-Bangladesh clash:

South Africa's wicket-keeper batsman Quinton de Kock strengthens the top-order and provides speedy start to the innings. The left-hander has the ability to adapt according to the situation.

Although South Africa lost its opening World Cup encounter to England, de Kock scored a well-compiled 74-ball 68 runs, including six boundaries and two sixes in an attempt to single-handedly save the sinking Proteas.

Bangladesh's wicket-keeper batsman Liton at the top-order impressed with his 90-ball 73, which included 10 boundaries, against India in a World Cup warm-up match. The right-hander scored his first ODI hundred against India in September last year. Although he has not been able to deliver on a consistent basis, one can expect him to be an X-factor on game day.

The right-arm fast bowler possesses the skills of bowling both in-swingers and out-swingers. The 24-year old is also known for his toe-breaking yorkers in the death overs. Rabada finished at the second position in the highest wicket-takers' list in the recently concluded Indian Premier League (IPL). In South Africa's first World Cup match against England, Rabada returned with the figures of 2/66, which included a crucial wicket of Joe Root.

Senior Bangladesh cricketer Shakib moved to the top in the ICC ODI rankings for all-rounders last month. The 32-year-old performed well during the tri-nation series against Ireland and West Indies. Shakib amassed 140 runs, including two unbeaten fifties. The left-arm bowler picked two wickets in a World Cup warm-up match against India, in which he stopped power hitter Hardik Pandya.