Mumbai are in third position with 14 points from 12 games and have home games remaining against Sunrisers and Kolkata Knight Riders. 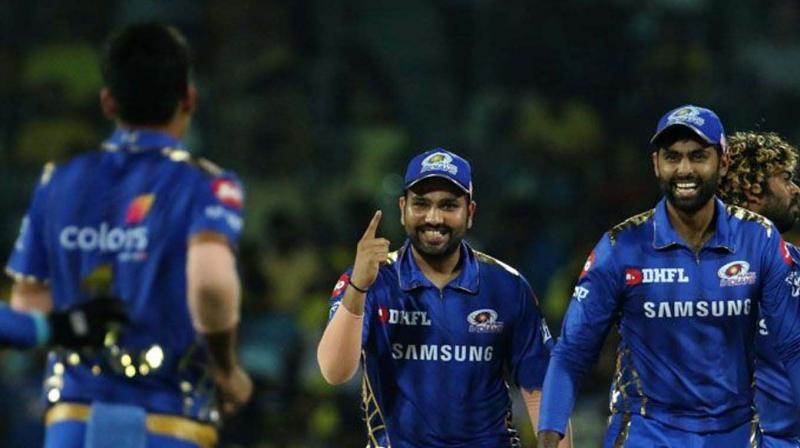 Mumbai Indians players celebrate the wicket of Shane Watson during their victory over Chennai Super Kings in Chennai on last Friday. (Photo: BCCI)

Mumbai: Mumbai Indians will be looking to seal playoff berth at home when they take on Sunrisers Hyderabad at Wankhede stadium here on Thursday. For visitors it is also a chance to bolster their playoff qualification but they will have to do it without their talismanic batsman David Warner.

Mumbai are in third position with 14 points from 12 games and have home games remaining against Sunrisers and Kolkata Knight Riders. SRH are currently in the fourth spot with 12 points from as many matches.

Warner has headed home to take part in the national camp ahead of the World Cup. He will back in national colours after completing one year ban post ball tampering charges in South Africa.

Despite missing last year, Warner carried forward the consistency from 2016 and 2017 season to score 692 runs in 12 games and Sunrisers had already lost their second top scorer in Jonny Bairstow.

Skipper Kane Williamson hasn’t been in the best of the form and he will have to step up though at the crucial stage for Hyderabad. Manish Pandey has got into the act but Vijay Shankar and Wriddhi-man Saha will have to shoulder responsibility.

Bhuvneshwar Kumar and Khaleel Ahmed would like the pace and bounce on the wicket here but they have to find the correct line and length quickly here. Afghanistan allrounders Rashid Khan and Mohammad Nabi will be the key especially with their bowling.

Mumbai openers Quinton de Kock and skipper Rohit Sharma have shown good form and they have destructive middle-order with big hitters like Hardik Pandya and Kieron Pollard. Pandya has played breathtaking cameos and he showed he can turn the game on his own against Kolkata Knight Riders at Eden Gardens. Pollard has won a game on its own here and played his part in other couple of wins as well.

Laisth Malinga has been the lone foreigner in the MI bowling line-up in last couple of matches. Jasprit Bumrah and Hardik Pandya have been the mainstays in bowling. Considering the home conditions MI will be tempted to use an allrounder Ben Cutting or unleash South African pacer Beuran Hendricks in place of Evin Lewis.