'When we won the game a player said to me - you've got a hat-trick': Sam Curran

Delhi were cruising towards the victory, requiring just 23 runs from 21 balls but Curran bundled out Delhi for 152 with a hat-trick. 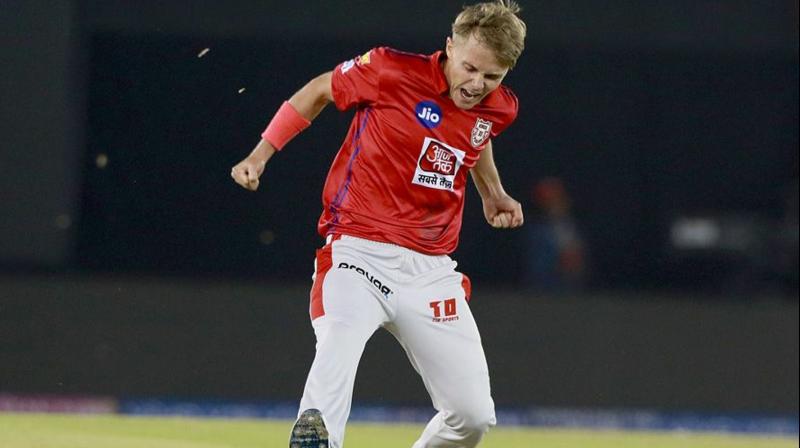 The hat-trick came in two overs- Harshal Patel was dismissed at the end of the 18th over and then the English fast bowler sent Kagiso Rabada and Sandeep Lamichhane off successive balls at the start of the 20th over. (Photo: BCCI)

Mohali: Fast bowler Sam Curran's four-for, including a hat-trick, secured Kings XI Punjab a 14-run victory over Delhi Capitals but he had "no idea" about his feat.

Delhi were cruising towards the victory, requiring just 23 runs from 21 balls with seven wickets in hand but Curran bundled out Delhi for 152 with a hat-trick.

The hat-trick came in two overs- Harshal Patel was dismissed at the end of the 18th over and then the English fast bowler sent Kagiso Rabada and Sandeep Lamichhane off successive balls at the start of the 20th over.

Prior to his hat-trick, the first in the 12th IPL, Curran dismissed Colin Ingram for 38 that tilted the game in favour of Punjab.

"No, not at all. My main focus was obviously that last ball when Rabada came and I knew his strengths and where I could bowl, so I was always aiming for his stumps and his toes," said Curran when asked whether he was aware of his feat.

"When we won the game, one of the players came up to me and said 'you've got a hat-trick'. I had absolutely no idea I had taken one," said Curran, who was adjudged man of the match.

Meanwhile, pacer Mohammed Shami provided a major breakthrough by removing Rishabh Pant for 39 and R. Ashwin ran Chris Morris out for a duck.

"I think we were very lucky that Shami changed the game when he got Pant out. I think they needed 30 off 28 balls, coming towards the end of the game it was almost gone, but the boys showed a lot of fight and the way Pant plays he's a very aggressive batsman," Curran said.

"Very lucky to get him (Ingram) out at that stage and Ravichandran Ashwin's run out first ball was a huge turning point in the game... we know what Morris can do. Bowling towards the end I just had one plan, the ball was reversing a little bit, I mainly wanted to give the batsman no room and try firing in as many yorkers as I could. Lucky enough we managed to get a great win," he said.

Delhi will host Sunrisers Hyderabad on April 4, while Punjab will travel to meet Chennai Super Kings on April 6.