Evin Lewis thrashed his way to 91 off 51 balls as the West Indies swept aside Pakistan by seven wickets in the third T20 International. 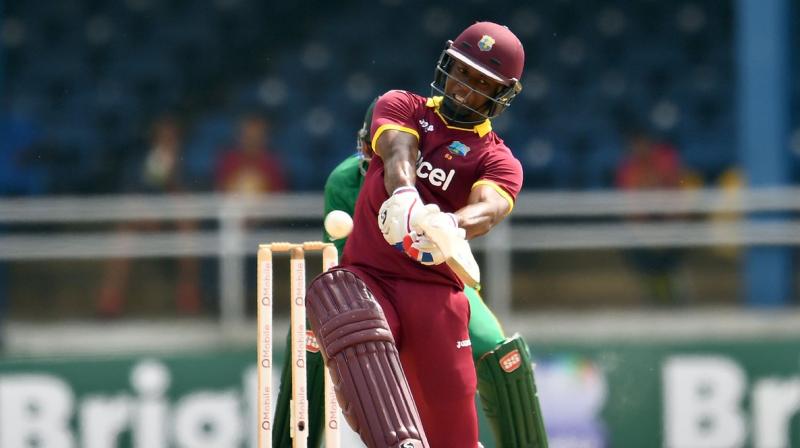 Evin Lewis hoisted nine sixes and belted five fours in a hurricane innings that kept the series alive going into the final match on Sunday at the same venue with Pakistan holding a 2-1 advantage. (Photo: ICC)

Port of Spain: Evin Lewis thrashed his way to 91 off 51 balls as the West Indies swept aside Pakistan by seven wickets in the third T20 International at the Queen's Park Oval in Trinidad on Saturday.

Responding to the visitors' total of 137 for eight, Lewis hoisted nine sixes and belted five fours in a hurricane innings that kept the series alive going into the final match on Sunday at the same venue with Pakistan holding a 2-1 advantage.

His assault was in stark contrast to the struggles of most of the Pakistani batsmen, with the notable exception of Kamran Akmal and Babar Azam, as a strong position was frittered away by the combination of careless strokeplay and disciplined West Indies bowling through the final eight overs of their innings.

Lewis lost opening partner Chadwick Walton early on in the chase to an excellent diving catch by Fakhar Zaman running in from the square-leg boundary off Sohail Tanvir.

Yet it was Tanvir who would suffer the most to the flailing blade of the left-hander.

Summoned by captain Sarfraz Ahmed in a desperate attempt to stem the flood of runs, Tanvir was plastered for 24 runs in the 14th over of the innings, an assault that ended the match as a contest.

Marlon Samuels helped him add 56 runs for the second wicket and debutant Jason Mohammed looked composed in a third-wicket stand of 76, his contribution being an unbeaten 17.

But everything else in the match paled in comparison to Lewis' relentless assault which ended with victory in sight as Wahab Riaz held the catch at long-off to give Shadab Khan the wicket.

"I just needed to get a start this time and decided to keep on playing my shots," said Lewis after receiving the man of the match award.

"It's been a bit of a struggle since getting that hundred against India (last August in Fort Lauderdale) but I'm delighted to be back among the runs."

Khan, man of the match with his potent leg-spinners and googlies in the first two outings, struggled to recapture the same control under the pressure imposed by Lewis, and to a lesser extent, the other top-order batsmen.

"We didn't take advantage of the good position we were in going into the last eight overs of our innings," said a disappointed Pakistan captain Sarfraz Ahmed.

"We are still ahead in the series though and I expect a much better effort in the last match."

Veteran Akmal (48) and Azam (43) had the visitors well poised for a total in excess of 160 after Ahmed chose to bat first as they put on 88 runs for the second wicket.

Samuel Badree had removed Ahmed Shehzad and Imad Wasim in the first over of the match.

However the introduction of Samuels for his first bowl in international cricket for 18 months following the remodelling of his action earned the home side a vital breakthrough and turned the tide of play.

Samuels' first delivery was an inviting waist-high full toss which Akmal attempted to heave out of the ground but could only find Lendl Simmons on the midwicket boundary.

Pakistan struggled for runs the rest of the way with a desperate West Indies team battling to limit the total to manageable proportions. Just 45 runs came off the last eight overs with Badree the pick of the bowlers in claiming two for 22.