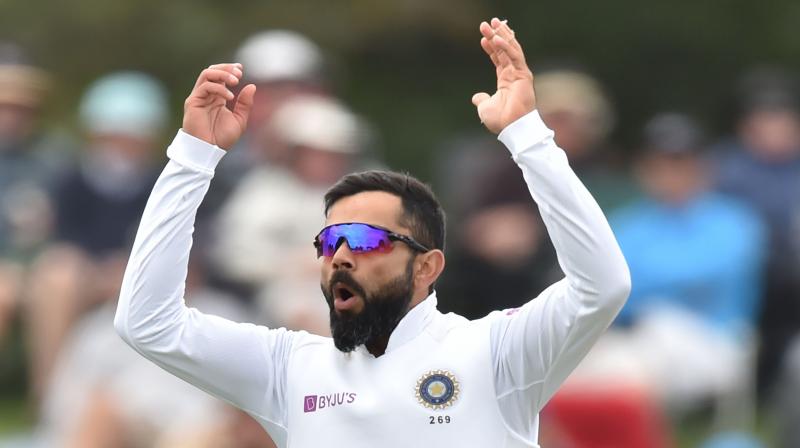 Indian captain Virat Kohli reacts as he bowls on day three of the second Test cricket match between New Zealand and India at the Hagley Oval in Christchurch. AFP photo

Indian captain Virat Kohli was left frustrated and deflated as New Zealand won the second Test inside three days in Christchurch on Monday to sweep the series.
India started the day at 90 for six and were all out for 124, before New Zealand chased down the required 132 to win for the loss of three wickets in 36 overs.

It ended a disappointing tour for India and Kohli as New Zealand, who won the first Test by 10 wickets early on day four, wrapped up the series with ease.
New Zealand are now unbeaten in their last 13 home Tests, winning nine of them, and in the past decade their record as hosts is played 39, won 20, drawn 13 and lost five.

In the latest series, on traditional New Zealand green wickets, India managed scores of 165, 191, 242 and 124, reflecting the low contributions from Kohli of 2, 19, 3 and 14.
Kohli came to New Zealand as the world's top Test batsman and oozing charm as he described New Zealand as the “nice guys” of cricket.

But during the series he lost his top ranking to Australian Steve Smith and when Kane Williamson went for three in the first innings of the second Test the pressure showed when he gave the New Zealand skipper a very animated send-off.

There was further evidence of frustration when he was caught on camera yelling an obscenity at a group of New Zealand supporters on Sunday.

The end came quickly for India on day three as Tim Southee and Trent Boult tormented the batsmen with their variety of inswing and outswing deliveries targeting both sides of the stumps.

Hanuma Vihari was the first to fall, in Southee's second over, when he turned a legside delivery too fine and was caught by BJ Watling diving to his left.

Five balls later and with no addition to the score, India's other overnight batsman Rishabh Pant was caught behind off a Boult delivery that swung away.

Mohammed Shami was caught for five by Tom Blundell at deep mid-wicket and Jasprit Bumrah was run out when trying to give the strike to Ravindra Jadeja, who was unbeaten on 16.

Boult and Southee signed for most of the dismissals with Boult taking four for 28 and Southee three for 36. The swing pair accounted for 25 of the 40 Indian wickets in the series.

There was enough seam and swing available for India to keep the New Zealand batsmen guessing but Bumrah and Umesh Yadav were unable to apply consistent pressure and Mohammed Shami was troubled by a sore shoulder.
New Zealand coasted through a century opening stand by Tom Latham and Blundell before losing three quick wickets.

Latham notched his 18th half-century and second of the Test before he was caught behind off Yadav for 52, Kane Williamson had a short stay for five, and Blundell went for 55.