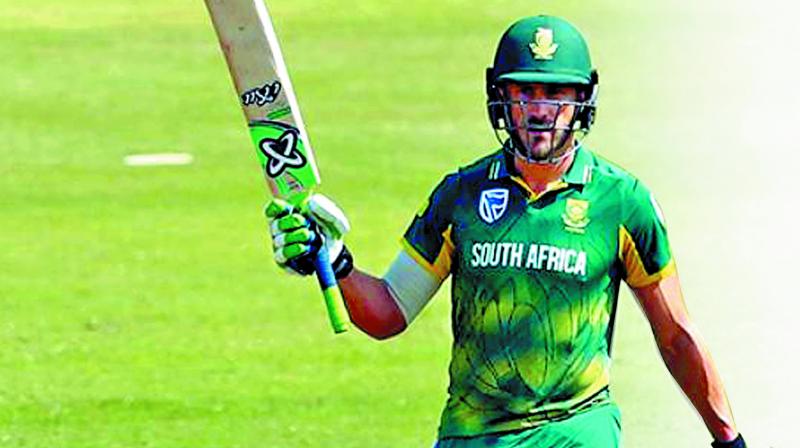 Durban: Captain Faf du Plessis led from the front with an impressive 120 as he single-handedly took South Africa to 269/8 in the first cricket one-dayer against India here on Thursday.

India’s leg-spin twins Kuldeep Yadav and Yuzvendra Chahal shared five wickets among them in an impressive bowling show but du Plessis  ensured that the Proteas have a competitive total on board after opting to bat. Du Plessis scored his eighth ODI hundred after a half- empty Kingsmead  Stadium bore witness to South Africa’s top- order collapse. The hosts lost four wickets for 51 runs before du Plessis and Chris Morris  (37) rescued them with a 74-run partnership for the sixth wicket.

The Protea skipper faced 112 balls from which he hit 11 fours and two sixes. For India, Yadav took 3/34 and Chahal returned 2/45 as the duo excelled  in their first proper overseas outing, underlining the team management’s faith in leg-spin since July last year.

Earlier, South Africa won the toss and opted to bat. As expected, Aiden Markram came in for the injured AB de Villiers and the hosts went in with only one spinner.

India’s playing XI was along anticipated lines, with Ajinkya Rahane slated to bat at no. 4 for the first time since January 2016.

A sell-out crowd was expected for this first match of the six-ODI series but the fans —mostly Indian supporters — only arrived in spurts on account of a working Thursday.