James Vince's knock of 59 runs enabled England to defeat New Zealand by seven wickets in the first T20I of the five-match series. 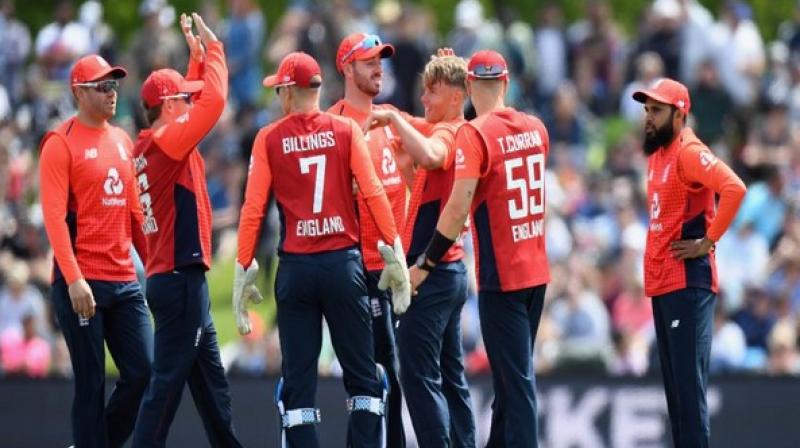 Former England skipper Michael Vaughan on Friday lauded the England team's victory over New Zealand and said they are outstanding in the limited-overs of cricket. (Photo:ECB/Twitter)

New Delhi: Former England skipper Michael Vaughan on Friday lauded the team's victory over New Zealand and said they are outstanding in the limited-overs of cricket.

James Vince's knock of 59 runs enabled England to defeat New Zealand by seven wickets in the first T20I of the five-match series at the Hagley Oval in Christchurch.

Chasing 154, England's openers Dawid Malan and Jonny Bairstow got the side off to a steady start as the duo put on 37 runs for the first wicket, but their resistance was ended by Kiwi spinner Mitchell Santner as he had Malan (11) caught at the third-man position.

Vince and Bairstow put up a brief 31-run stand, but their stint came to an end as Santner dismissed Bairstow (35) in the 10th over, reducing England to 68/2.

England skipper Eoin Morgan joined Vince in the middle and both batsmen ensured that the side does not fall behind the asking run rate. Vince went past the 50-run mark in the 14th over of the innings.

As England started to gain an upper hand in the match, Kiwis brought Santner back into the attack and he did not disappoint as he sent back Vince (59) back to the pavilion, with England still 32 runs away from the target.

In the end, Morgan and Sam Billings ensured England does not suffer any more hiccups and the duo enabled the side to register a victory by seven wickets and with nine balls to spare. Morgan and Billings remained unbeaten on 34 and 14, respectively.

Earlier, Ross Taylor's knock of 44 runs enabled New Zealand to put up a score of 153/5 in the allotted twenty overs after being put in to bat first.

The Kiwi side got off to a bad start as the side lost its opener Martin Guptill (2) in the third over of the innings. Colin Munro (21) smashed 21 runs in Sam Curran's third over, however, he was dismissed by Chris Jordon in the sixth over, reducing New Zealand to 39/2 after six overs.

Tim Seifert and Colin de Grandhomme retrieved the innings for the Kiwis as the duo put up 33 runs in just four overs, but as soon as the partnership started to look threatening, Adil Rashid sent de Grandhomme (19) back to the pavilion in the 11th over.

Seifert (32) was also dismissed soon after and the Kiwi side was left struggling at 93/4 in the 14th over. However, Taylor and Daryl Mitchell provided the much-needed impetus to New Zealand innings and they took the Kiwi total past the 140-run mark.

Taylor (44) was sent back to the pavilion in the final over of the innings, but Mitchell ensured that New Zealand goes past the 150-run mark in the allotted twenty overs.

Jordon was the pick of the England bowlers as he scalped two wickets.

England and New Zealand will next play in the second T20I on Sunday, November 3.