Sri Lanka's batting had been insipid until now, but they finally posted a competitive score of 142 for six, with Kusal Perera hitting 57. 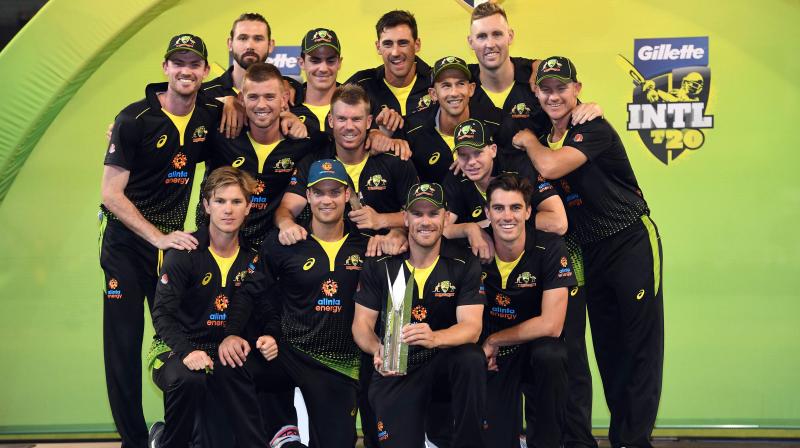 The Sri Lankan bowlers, led by Lasith Malinga, have been no match for a quality Australian batting line-up, spearheaded by Warner who has now scored 217 in three innings without losing his wicket. (Photo: AFP)

Melbourne: Australia cruised past Sri Lanka to clean-sweep their three-match Twenty20 series Friday, with an in-form David Warner grinding out a third successive half-century in the seven-wicket win.

The home team have been dominant throughout, winning by 134 runs in Adelaide and by nine wickets with seven overs to spare in Brisbane ahead of the clash in Melbourne.

Sri Lanka's batting had been insipid until now, but they finally posted a competitive score of 142 for six, with Kusal Perera hitting 57.

However, their bowlers, led by Lasith Malinga, have been no match for a quality Australian batting line-up, spearheaded by Warner who has now scored 217 in three innings without losing his wicket.

"It was pretty clinical once we got into a routine," said Australia captain Aaron Finch.

"The way the bowlers set it up for us over the last two games, it was outstanding.

"Every game is a different challenge and a different surface, so it's important to bring in your best, in terms of preparation and mental side of the game too."

Openers Finch and Warner were both dropped early in the run chase at the Melbourne Cricket Ground, and they made the visitors pay, putting on 69 for the first wicket.

That brought Steve Smith to the crease, but he only lasted nine balls, caught in the deep for 13.

Warner, who scored an unbeaten 100 and 60 not out in the opening two games, was heard on the pitch microphone saying he was struggling with his rhythm.

But he still produced the goods, bringing up his 50 off 44 balls to end the match unbeaten on 57, aided by Ashton Turner who chipped in with 22 as Australia reached 145 for three with 14 balls to spare.

Australia have set a target of being the number one T20 side by the time the World Cup is played on home soil in a year's time, and their whitewash of Sri Lanka is set to propel them above South Africa and into third place.

An even bigger test starts on Sunday, when they face top-ranked Pakistan in the first of three T20s.

"We haven't been up to our standards. We haven't performed at our best and if we don't, we will end up like this," said Sri Lanka opener Niroshan Dickwella.

"We learnt a lot in this series, but we couldn't even compete properly." Finch won the toss and put Sri Lanka into bat and it didn't start well for the visitors.

Dickwella, elevated to opener after Danushka Gunathilaka was dropped, was out first ball.

Kusal Mendis and Perera showed some aggression, slapping a handful of boundaries, before Kane Richardson tempted Mendis into another big shot and he was caught at deep square for 13.

Perera and Avishka Fernando pushed the score to 65 for two at the halfway mark, building a 43-run partnership, the team's highest of the series, before Fernando was caught near the boundary off Pat Cummins for 20.

Oshada Fernando followed soon after for six, but the aggressive Perera kept plugging away, bringing up his sixth T20 half-century off 38 balls. He fell for 57, top-edging a Cummins ball to Ashton Turner at mid-off.